4th Annual Energy Summit ‘29+1’. CEEP members call for an Energy Union based on a digital economy 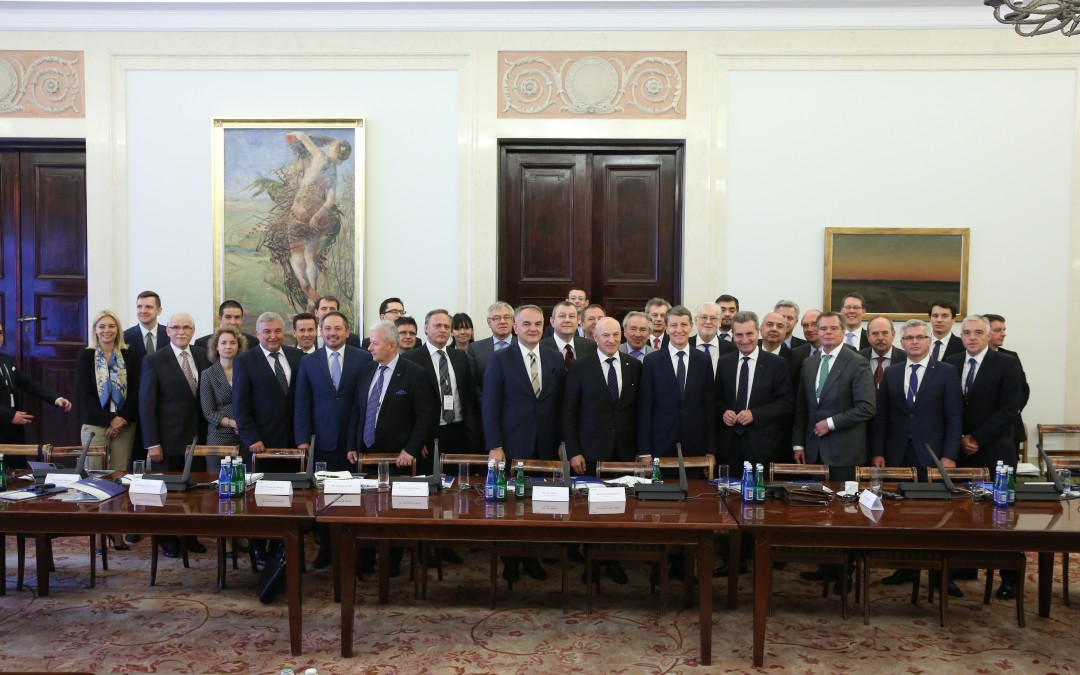 During the first three events in Budapest, Vilnius, and Bucharest, the ‘29+1’ summits have successfully established a tradition that brings together a distinguished and knowledgeable group of decision-makers to discuss the major challenges and opportunities in the field of energy policy. This year’s topic, ‘Energy Meets Digital. Digital Economy: a Technology Driver for an Energy Union’, focused on the game-changing interaction between the energy and digital realms.

The Summit took place on June 15th and 16th in Warsaw. On the first day, a high-level dinner in the Royal Palace on the Water was organised, attended by key players from energy and energy-intensive industries from Central Europe, Polish Parliamentarians and governmental officials. Top level guests from the EU, Günther Oettinger, European Commissioner for Digital Economy and Society, and Klaus-Dieter Borchardt, Director for the Internal Energy Market at the European Commission’s DG Energy,  gave keynote speeches on their visions of Europe’s energy market and the necessity of digitalisation to harmonise and create one compatible, concise system. The speakers were introduced by Paweł Olechnowicz, President and Chief Executive Officer of Grupa LOTOS and President of the Board of Directors of CEEP, who inspired the debate on the need to connect the forces of energy and digital innovation to achieve a powerful synergy.

The second day, with the setting of the Presidential Palace for the main debate, also provided a historical backdrop to discuss such topical issues as the Energy Union and technological changes in the energy sector, including digitalisation. Prof. Dr. Friedbert Pflüger, Director of the European Centre for Energy and Resource Security at King’s College London, moderated the debate for the participants, who were mainly from the energy and energy-intensive industries. Andrzej Czerwiński, Poland’s new Minister of the Treasury, joined the debate immediately after his official swearing-in ceremony, which was taking place in a room nearby to where the Summit was held. In order to increase the openness of the discussion, the meeting was organised under the Chatham House Rule. This gave participants the freedom to express their opinions and judgements, however controversial they could be.

Warsaw proved to be a perfect place for a fruitful discussion between Central European energy companies and the European Commission. Jacek Michałowski, Head of the Chancellery of the President of Poland, underlined the country’s extraordinary geopolitical situation and strong support for energy integration in Central Europe. Hence, in recent years, Poland has initiated and backed efforts to develop regional co-operation in the energy field within the V4+, and also worked to reinforce the importance of security of supply as the key objective behind the EU’s energy policy. This has brought tangible results in the form of new EU regulations, financial instruments, and interconnectors, through which, it is possible to quickly achieve full integration of electricity and gas markets in the region. The collective group of energy security, solidarity, and trust has become one of the pillars of the Energy Union, which has to be strengthened by digitalisation.

European funds will be vital in the process of challenging insufficient technological innovation and infrastructural connectivity, which is especially a burden upon countries from Central Europe. That is why the Summit participants welcomed the establishment of the Connecting Europe Facilities (CEF), as well as the European Fund for Strategic Investments (EFSI). Günther Oettinger stressed that the financial thrust from the European funds can lead to multiple investments, which will secure the implementation of the necessary technological innovation and digital transformation of the energy industry. Particular attention should be paid to the resilience of the energy market, and its growing dependency on management through IT. More robust solutions, such as re-visiting industrial systems’ security procedures and developing effective prevention, are absolutely needed.

Heiko Ammermann, from Roland Berger Strategy Consultants, urged that the North–South Corridor must not become one of Europe’s many ambitious plans, which have little chance of ever becoming reality. He presented an executive summary of a policy paper that set out to answer the fundamental question: how can we make it happen? The analysis looks at specific energy transmission projects, which jointly constitute the backbone of the Corridor. It proposes a roadmap to achieving significant progress with the Corridor, by implementing key projects by the end of the decade. The steps foreseen by this plan, include the establishment of a regional co-ordination platform that would monitor the overall vision of the Corridor, support project development, financing and technical planning, and also facilitate the fulfilment of projects that are critical for security of supply, but feature less favourable business cases.

As a result of the meeting, the Warsaw Memorandum, which reflects the key issues of the discussion and expectations of the energy and intensive-energy industries from Central Europe, was signed and handed to Commissioner Oettinger.