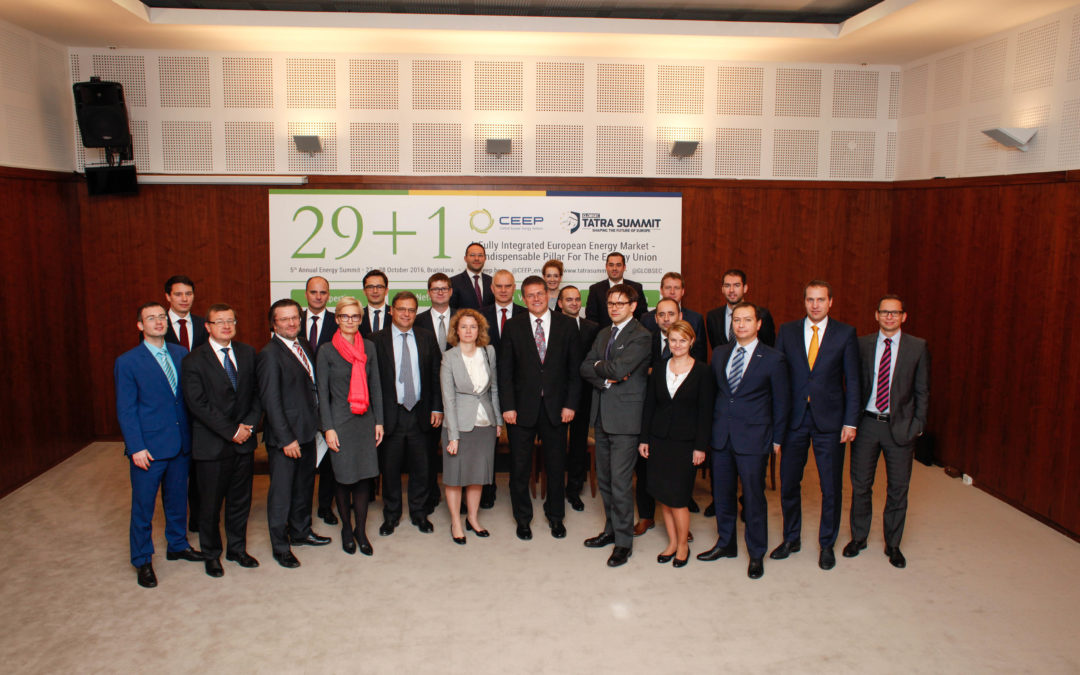 CEEP members are urging 100% free EUAs for energy-intensive industries, such as chemicals, fertilizers, refineries, and steel, until 2030, as well as a 100% derogation for power plants that use new technologies with a 43% energy efficiency (lignite) and 45% (coal). Moreover, they request the strengthening of the beneficiary Member States’ con-trol over the Modernisation Fund, and ask for the right to give subsidies to indigenous fossil fuels, to the extent decided by each Member State. These are the main recom-mendations of the ‘29+1’ Annual Energy Summit, organised by Central Europe Energy Partners (CEEP), in co-operation with GLOBSEC, on October the 27th–28th, in Bratislava.

CEEP members – who comprise Central Europe’s leading energy and energy-intensive companies – entered into a comprehensive dialogue with the European Commission’s Vice-President in charge of Energy Union, Maroš Šefčovič, only weeks before the publication date of the European Commis-sion’s legislative ’Energy Union Package’. In this context, they underlined that the security of supply in the electricity sector should take into account different electricity mixes across the EU Member State and it should also address the power availability for trade and market transactions.
“The new proposed target of 15% of electricity interconnections for 2030 should be thoroughly analysed as it can negatively affect the electricity markets in Central Europe, given their limited ability to transport the unscheduled loop flows that prohibit proper market exchanges. This can substantially influence the flows of energy in the Member States making the whole system unstable” said Eryk Kłossowski, Chairman of the Board of Directors of Central Europe Energy Partners.

The Bratislava Memorandum, which was handed to Commissioner Šefčovič on this occasion, reflect-ed the general position of participants. They welcomed the further development of the Energy Union which should be built on mutual trust and solidarity, especially at a time when the EU is facing major turbulences. They also stressed that whilst the EU promotes its achievements and leading role when it comes to CO2 emissions reductions and the Paris Agreement, it should also strive to ensure afforda-ble energy prices for the industry to be competitive, and encourage the necessary economic growth in Central Europe, in order to reduce the gap with Western Europe.
“I welcome the Bratislava Memorandum and appreciate the efforts the members of the CEEP have put into its preparations. At European level we are working hard towards creating an Energy Union that will provide all Europeans with energy supply that is secure, sustainable, competitive and affordable. At the same time we are open to views of stakeholders and partners as these are invaluable in the process of creating our legislation,” stated Maroš Šefčovič.

Participants agreed also that further development, with the Commission’s support, of gas infrastructure in Central Europe, mainly the North-South corridor, would facilitate creation of integrated market of energy in the region with necessary interconnections and gas storage facilities. It has already helped the price difference for gas paid by the Central European countries to drop significantly, but still remains higher than for Western countries. “Europe, in order to reach the climate goals agreed in Paris, will have to decarbonise its economy. But nowhere more than in Central Europe climate policy has to be accompanied with right political context where energy infrastructure development and diversity of supply are of utmost importance,” stated Robert Vass, President of GLOBSEC.

Read the full memorandum in the CEEP Report of October.