CEEP debate on the role of the Just Transition Mechanism 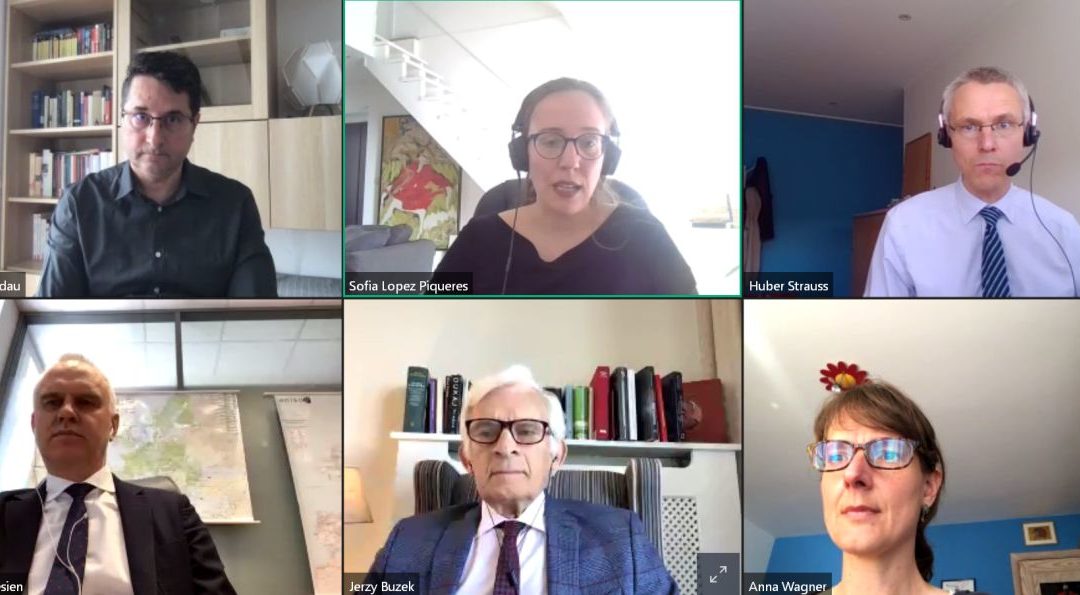 Sofia López Piqueres (Policy Analyst, European Policy Centre) chaired the dialogue. She pointed out, that most of the debate and interest is on the JTF, the 1st pillar, however the InvestEU and the public loan facility (with the EIB) are also important. Nevertheless the JTF was boosted from EUR 7.5 billion up to EUR 40 billion for the regions most affected by the transition, so there is room for discussion. Additionally Covid-19 has opened everyone’s eyes, that there is need for guidance for the transition.

Jerzy Buzek (Member of the European Parliament) explained how the idea of a Just Energy Transition was born, especially with adding the word “energy” to the name of the fund. The idea was developed with CEEP 10 years ago, at the beginning the challenge was how to integrate the Central European energy markets which was achieved with the Energy Union. The second issue, more difficult is the Green Deal, because Central Europe is dependent on coal more than the other Member States. The work should be continued with CEEP to achieve climate neutrality by 2050, the JTF rapporteur stressed.

He later elaborated on why energy is so important for climate change: “There is no vaccine for global warming. The energy sector is responsible for 70% emissions in Europe. It is important to understand that also the transport or agriculture use in many ways the energy and on top of things – all the industry uses energy”. Mr Buzek underlined, that the JTF project was developed in ITRE and he had to convince his colleagues, but also the EC, that the JTF is absolutely necessary for energy transition.

Mr Buzek mentioned the problem of air pollution and energy poverty. That is why in his opinion the possibility to switch to natural gas for the next 15-20 years is important and the EIB should be a bank supportive of energy transition in regions like Silesia.

Anna Wagner (Deputy Head of Unit, DG REGIO) said that the EC announced European recovery instrument and in particular the corresponding sectoral frameworks that are part of the cohesion policy. She stressed that the EC is making sure that no region is left behind. This is why the JTF is more than just funding, it will also offer guidance, it is embedded in cohesion policy.

She explained the main novelties of the Commission’s recovery plan – there will be additional funding for crisis repair in the EU within the framework (EUR 55 billion). It will be available for investment in green and digitalisation projects, for relaunch of the economy for SMEs or the health sector. Cohesion policy is fighting the pandemic in all the sectors, so it is broader than just energy transition – it’s green, because it deals with climate change – she underlined. The JTM is not the only mechanism helping the EU achieve climate neutrality.

Hubert Strauss (Lead Economist, Projects Directorate – Regional Development Division, EIB) presented new EIB lending policy which was adopted last year. He underlined that in certain circumstances the bank can support district heating based on fossil fuels. In general gas will be supported only until 2021.

The transition of coal regions always entails multiple transitions he said. There are huge investments needs, but there is also the environmental transition. However, there will be always jobs lost first in the regions, before it is possible to create them.

Leszek Jesien (Chairman of the Board of Directors, CEEP) pointed out that there is a lot of work to make the transition happen. The JTF is a mechanism to absorb the asymmetry of the regions and countries. There are 3 important aspects: social, business and technological. He argued, that we should not concentrate too much on the social one. The business attitude is necessary in order to make the projects bankable.

Main point of his message is that the coal regions need to be rebuild around their strengths: engineering, good infrastructure and manufacturing. The more we go along the line of the European Green Deal, the more energy and electricity dependent we become, therefore it is very much an energy transition. Consequently energy security is a very important issue – without coal it should be based on gas, RES, batteries and hydrogen.

Radu Dudau (Director of Energy Policy Group) commented on the Commission’s proposed increase in the JTF, because it changed the approach to the fund. Now there is enough resources, however, the JTF should concentrate more on the social costs in the carbon intensive regions. There will be a lot of affected workers and families. More than 1500 lignite miners are over 45 years old, so they need i.e. bridging for pensions.

Moreover it is crucial to invest in local economy – support SMEs and create new jobs. The JTF should not be spent only for energy infrastructure. There is still a need for modern gas power plants, it is the only way to move forward with the Green Deal in Central Europe, but the Modernisations Fund is for this.