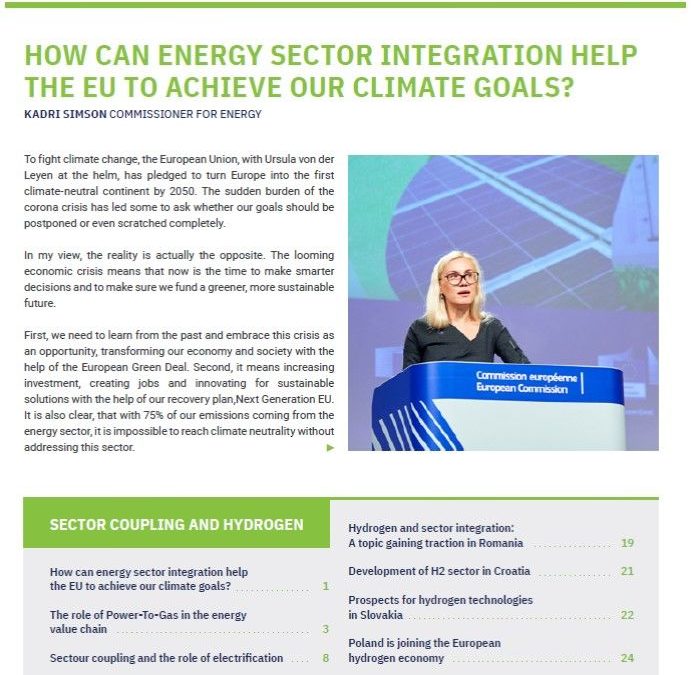 The second edition of CEEP report in 2020 focuses on the Energy System Integration and the role of hydrogen. These topics have recently gained a lot of attention in the debates in Brussels and the capitals how to frame the future energy systems with a perspective to achieve climate neutrality by 2050. In this CEEP report we show that Central Europe is also considering the different options of sector coupling and the potential use of hydrogen in the power generation, transport and industry. We present for you some of the theoretical approaches as well as the practical examples from the Central European countries.

In the opening message Kadri Simson, Commissioner for Energy presents the motives and aims of the EU Energy System Integration and Hydrogen strategies that has been announced on 8th July. They will pave the way towards a more efficient and interconnected energy sector, driven by the twin goals of a cleaner planet and a stronger economy. Ms. Simson argues that “We need to rethink the ways we produce, transport, convert and use energy, and the roles of all actors along the way” adding that “In an integrated system, we will use less energy by relying on more efficient processes, cars and homes (…)”. Moreover, an integrated energy system “introduces new forms of renewable and low-carbon gases (like clean hydrogen) for those industrial sectors or transport modes where electrification is not an option.”

The experts from REKK foundation based in Budapest, Hungary, explain what the power-to-gas technologies are, what can be their role in the future system and how would it cost. They argue that advantage of the P2G technology is its capability to store low-carbon renewable electricity in the form of hydrogen (P2H) or synthetic methane (P2M).

What is the role of electrification in sector coupling concept? For this question Kamil Moskwik from Jagiellonian Institute is trying to answer, stating that sector coupling plans to increase the use of electricity from the cheapest forms of energy generation, i.e. wind power and photovoltaics, to supply specific sectors, such as transport, various industries and the heating of buildings, with a view to minimising dependence on fossil fuels which contributes to greenhouse gas emissions.

The role of sector coupling with particular focus on heating and transport sector is presented by Andrzej Rubczynski from Forum Energii. He shows that the integration of electrified transport and heating with the energy system using RES, may bring numerous benefits, such as: reducing total operating costs of energy sectors; cutting CO2 emissions; reducing dependence on gas and oil imports.

Rolandas Zukas, CEO of EPSO-G from Lithuania focuses on the role of infrastructure in the energy systems of the future. He believes that development of Power-to-Gas technology in the form of utility scale electrolysers and subsequent hydrogen integration can ease the transition towards a deep decarbonization, thanks to the ability of the gas grid to integrate varying geographies and scales, as well as admixtures of hydrogen into the grid.

In an integrated energy system, hydrogen can support the decarbonisation of industry, transport, power generation and buildings across Europe. We present the stories from Central European countries how the hydrogen technologies are developing.  Mihai Bălan and Radu Dudău describes projects in Romania; Antun Dujmovic focuses on Croatia; Veronika Oravcova presents Slovakian approach and Marek Foltynowicz and Krystian Krupa look closer at Poland.

At the other side of the coin, Liutauras Varanavičius from Litgrid shows the benefits of synchronisation of Baltic States with European continental grid. He states that the projects will not only prepare the Baltic electricity transmission system for connection to the continental European networks, they will also help to connect and manage renewable energy resources in electricity transmission systems, as well as protect the country's green energy targets from unfair competition from third countries. The connection between Lithuania and Poland will allow the countries to install additional 1.7 GW offshore wind farms.

As an attempt to conclude the reflections over these interesting areas, we publish CEEP feedback on Smart sector integration and hydrogen submitted during the public consultations pursued by the European Commission in spring this year.

Have a nice reading!