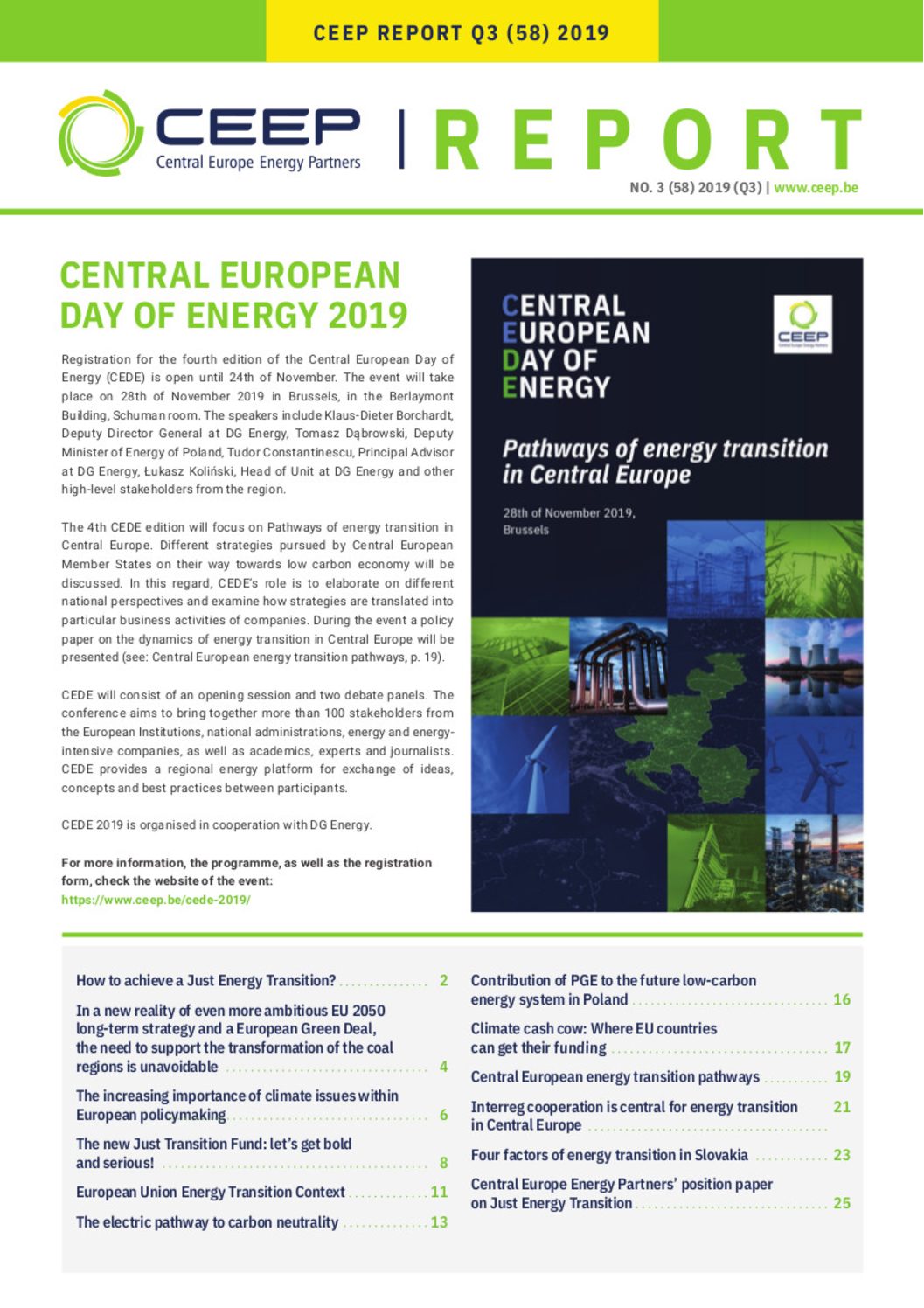 The 4th edition of the Central European Day of Energy (CEDE) will take place on 28th of November 2019 in Brussels and will focus on “Pathways of energy transition in Central Europe”. The event is organised by CEEP in cooperation with the European Commission DG Energy. The CEEP Report Q3 2019 aims at shading light at the complex mater of strategies, challenges and solutions for achieving a just energy transition in the region.

Discover the agenda and register for CEDE 2019 by following this link:

The Polish Deputy Minister of Environment and President of COP-24 Michał Kurtyka, stresses the weight of socio-economical barriers of energy transition in the CE region, and advises to consider the effects of the process on local communities. A very good example of how the interests of local communities can be taken into consideration is the Coal Regions in Transition Platform, which includes 41 regions in 12 Member States. Member of European Parliament Jerzy Buzek is a long advocate of a strategic approach to energy transition. The creation of a special fund, which should operate in the context of the next 3–4 MFF’s, is the only way to tackle the wide range challenges of these regions, which currently offer more than 300,000 direct jobs.

The European energy policy has undergone some serious changes in the last few years. Climate and environmental issues are now part of the Energy Union and this emphasizes the importance of the sustainability dimension. Nevertheless, as prof. Leszek Jesień, Chairman of the Board of Directors, CEEP says: “…policy makers should not forget about supporting measures, particularly targeted at those who may be asymmetrically worse and affected by the systemic energy transition.” New sources of financing are thus necessary in order to reach the energy and climate targets, set out in the National Energy and Climate Plans. The “Just Energy Transition Fund” could definitely help achieving this goal.

Jerzy Dudek and Piotr Szlagowski-Budacz elaborated on the idea of the Just Energy Transition Fund (JET Fund). Their concept places citizens at the centre of the energy transition, by offering financial support to people who would not be able to benefit from it otherwise. Crucial to the success of this project is the increase in the EU budget. The authors argue that the “energy transition” echoes the post-communist “economic transition”, which “was a great economic success but involved substantial social costs, which raised questions about its legitimacy”. The JET Fund should therefore concentrate on local infrastructural projects and increasing energy efficiency among final consumers.

One of the solutions in bringing the EU closer to achieving carbon neutrality by 2050 is the electrification of transport, buildings and industry, reaping the benefits of sectoral integration and sector coupling. Marion Labatut from Eurelectric estimates that annual investments of EUR 100 billion in generation and storage across the EU as well as considerable investments in networks are required.

The Q3 CEEP Report 2019 looks also into some national approaches and struggles towards energy transition. In the case of Estonia, the oil shale industry remains a key industry, even though Estonia is in favour of the EU plan to cut greenhouse gas emissions drastically by 2050. Slovakia announced the end of state subsidies for coal utilisation in electricity generation by 2023. This means however, that the Upper Nitra region will be affected negatively in the socio-economical dimension by these developments. The largest utility in Poland PGE – will invest in offshore wind and PV, as well as new CCGT and CHP units over the next ten years.

CEEP contribution to the debate on “Pathways of energy transition in Central Europe” draws the attention towards the problems of energy poverty and rising energy prices, but also high capital costs in RES investments. That is why an ambitious MFF, a dedicated JET Fund for Coal Regions in transition, more flexibility concerning the use of the CF and ERDF funds and a well-designed funding mechanisms in the fourth phase of the EU ETS is essential.