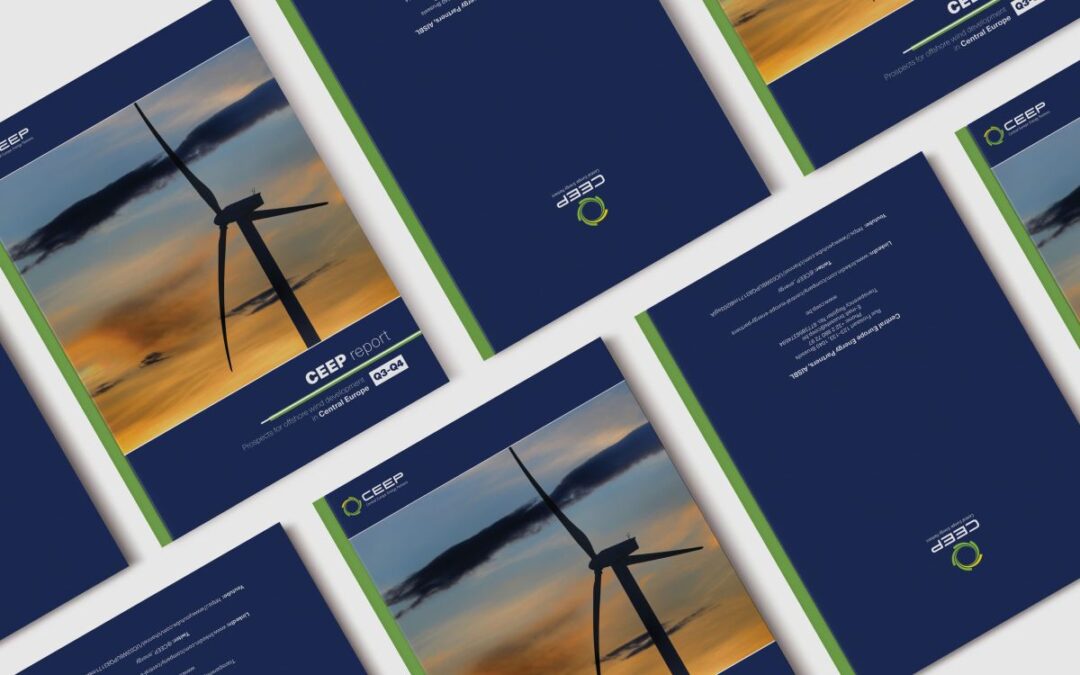 The third and fourth edition of the CEEP reports touches on an important topic: prospects for offshore wind development in Central Europe. Wind energy has become a major driver for RES deployment in Europe and seems fundamental to reaching Europe’s climate and energy targets in an effective way. In the 2050 Long Term Strategy, the Commission has identified wind energy as the dominant power generation technology by 2050, with projections of up to 450 GW of installed offshore wind capacity in Europe.

In the opening message, Mrs Sikow-Magny, Director of Internal Energy Market at the European Commission underlines the importance of the recently published European Offshore Renewable Energy Strategy, which aims at fostering a rapid, massive, cost-effective and sustainable scale up of offshore renewable energies throughout the EU. Mrs Sikow-Magny lists out benefits coming from the Strategy in developing offshore wind energy and building a stronger Europe fit for the future challenges and opportunities. She also underlines the importance of the regional cooperation in achieving clime goals and in maintaining and strengthening the European leadership in this sector.

Giles Dickson, CEO of WindEurope, gives an interview, in which he points out three key issues, that can contribute in achieving a goal of up to 450 GW of offshore wind installed capacity in the whole of Europe. He also gives his views on regulatory changes that should be introduced in Central European countries to speed up the deployment of offshore RES and on technological/innovation developments in offshore and onshore wind to be expected beyond 2030.

Rolandas Zukas, CEO of EPSO-G focuses on Lithuania’s architectures offshore wind farm debut auction as of 2023. Mr Zukas explains that by 2050, Lithuania aims to generate enough electricity from renewable energy sources to meet its entire demand, with offshore wind farms to play an important role in the design. He puts his attention on the current state of play of the Lithuanian legislation and describes the role of the regional approach taken by the Lithuanian government to boost the development of offshore wind energy.

Mariusz Kawnik, Executive Director and Donatas Jodauga, CEEP draw attention to the 2019 Offshore Wind Outlook by IEA, which gives a deep dive into the potential growth scenarios for the emerging global offshore wind market, including the overview of current state-of-the-art technology, existing opportunities and current challenges the market is facing.

The potential from the Baltic See in the Polish zone is presented by Aneta Wieczerzak, Media and PR Coordinator, Spokeswoman, Polish Wind Energy Association. She indicates that Poland can become a leader in offshore wind development in the Baltic Sea with its target of installed capacity of 28 GW and could meet close to 60% of the forecasted national electricity demand by 2050. She also puts her attention to the regional cooperation, highlighting the importance of the Baltic Sea Offshore Wind Joint Declaration of Intent.

Challenges Ahead Offshore Wind Projects in Croatia are described by Krševan Antun Dujmović, Advisor and Assciate, Institute for Development and International Relations. He believes that Croatia faces a number of challenges regarding its geography, regulatory framework,  lack of political will and interest of foreign investors, and the fragile viability of development of offshore wind projects in general.

The topic devoted to the prospects of wind energy in Europe is addressed by Rafal Mietkiewicz, Expert, Institute of Energy Policy. He focuses his attention on the dynamic development of the offshore wind industry in Europe. At the same time, he points out a fact that among the countries leading in the development of offshore wind energy, there is a noticeable lack of countries such as Poland, Romania or Croatia, which have the unique potential to play the role of  a central energy hub for North-Eastern Europe in achieving for Europe the position of global leader.

Mihai Bălan, Senior Research Associate and Radu Dudău, Director, Energy Policy Group make a presentation on the offshore wind outlook at the Black Sea. Experts present Romanian potential in offshore wind, which has not been thoroughly investigated so far through on-site measurements. They highlight that one of the most important challenges for onshore and offshore wind development in Romania is related to a grid access. In this regard, Mr Bălan and Mr Dudău believe that a proper national legal and regulatory framework is a key issue that must be addressed in time in order to enable offshore wind development.

Aleksandra Lewandowska, Researcher, Jagiellonian Institute analyses the state of offshore development in Poland, Lithuania, Latvia and Estonia and their future plans in this area. Mrs Lewandowska concludes that organized cooperation in the Baltic Sea region, as an area that is one of the pillars of energy transformation, may include spatial planning of maritime areas, development of maritime and terrestrial networks and the creation of a financial framework or technical standards.

As an attempt to conclude the reflections over this interesting area, we include the CEEP feedback on Offshore Renewable Energy Strategy submitted during the public consultations pursued by the European Commission this year.

*Note to the readers: All feedback was gathered ahead of the publication of the Offshore Wind Strategy