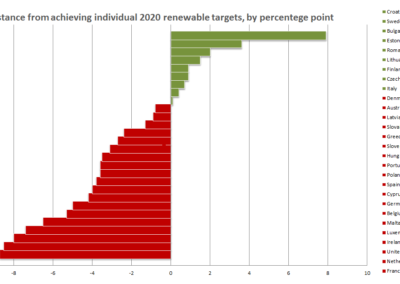 Six Central and Eastern Europe countries have already achieved their share of renewables in their national energy mix. The best performer is by far Croatia which surpassed the target by 8%, according to the most recent available EUROSTAT data (2014).

Having achieved a share of 16% renewables in its final energy consumption in 2014 and an estimated share of close to 16.4% in 2015, the EU as a whole is well on track to reach its 20% target by 2020. However, Member States will have to keep up their efforts in order to reach their national goals. While global investments in renewable energy continue to increase to above €260bn, European investments have dropped by more than half since 2011 to €44bn last year. Today, the EU accounts for only 18% of total global investment in renewables, down from close to 50% only six years ago.

This data shows progress up to 2014, so countries still have six years to make it to their target from this point.

In 2015, renewables contributed to reducing EU greenhouse gas (GHG) emissions by 436 MtCO2eq, the equivalent of the emissions of Italy. At a macro, EU level, renewables reduced the EU's energy import bill by around €16bn in 2015: this could grow to around €58bn by 2030.

The Clean Energy for All Europeans package, presented by the Commission last November, contains the main provisions to enable Member States to collectively reach the target of at least 27% renewable energy by 2030.

The renewable energy sector has a turnover of around €144bn in 2014 and more than one million people employed in the EU.

The total installed capacity of the PGE generating units (hydroelectric power plants and wind farms) amounts to approximately 2 133 MW. PGE Group intends to retain its leadership in the renewables segment and account for approx. 25% of domestic renewables generation by 2030.

In Croatia, HEP Proizvodnja, CEEP member, produces electricity in 26 hydro power plants organised in three production areas (North, West, South), in the independent operative area of Dubrovnik HPP, and in four thermal power plants, while in three cogeneration plants it produces both electricity and heat. The total generation capacity is of 2407.74 MW. 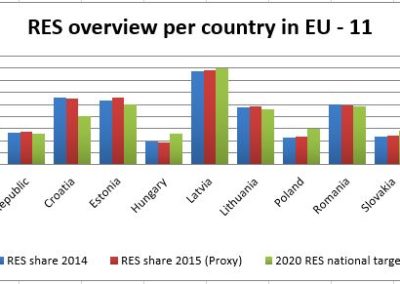 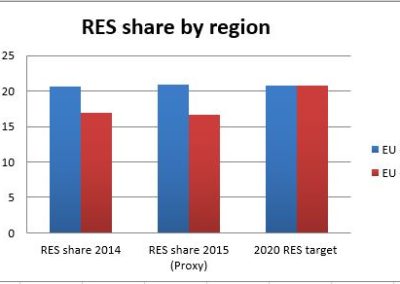