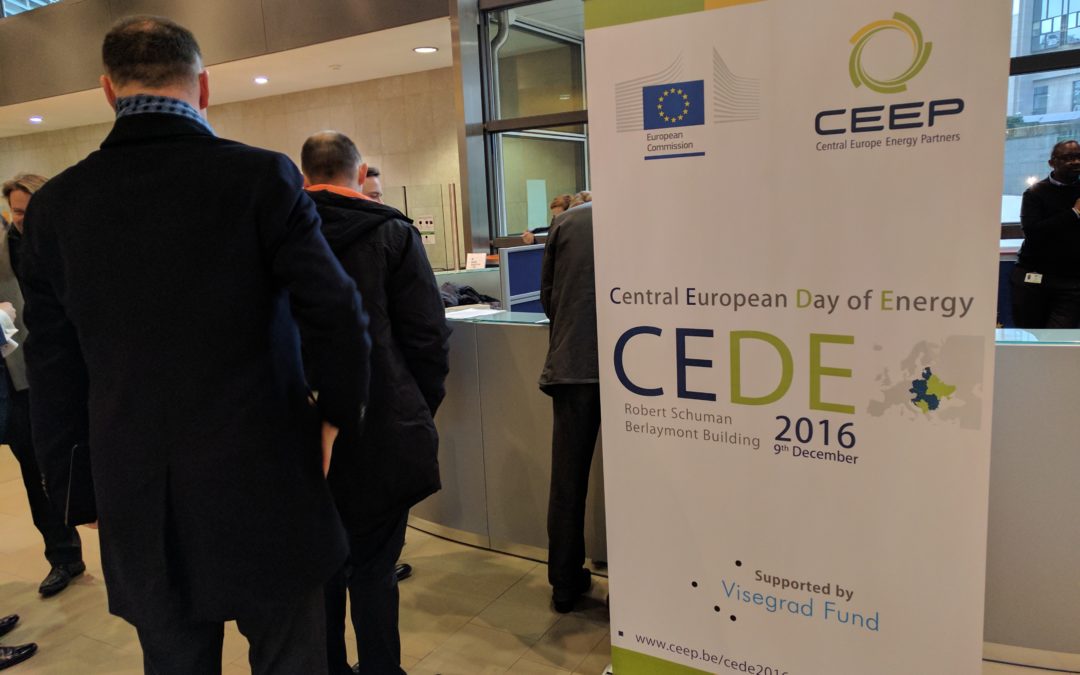 The first Central European Day of Energy (CEDE) event attracted over 130 stakeholders from Central and Eastern Europe to Brussels, on the 9th of December. During the discussions, participants agreed that the Central Europe region needs real diversification of the supply of energy resources.  It was especially pleasing that Maroš Šefčovič, Vice-President of the European Commission for the Energy Union, reflecting the success of the gathering, confirmed that the CEDE event should become a permanent platform for dialogue.

The event was opened by Dominique Ristori, Director-General of DG Energy, who focused on the three main energy policy priorities of the European Commission: energy security, regional co-operation and clean energy. He stressed that in terms of regional co-operation, some success has been already achieved with key projects in electricity and gas, thanks in part to co-operation within the CESEC initiative.

The Vice-Chairman of the Board of Directors of CEEP and Vice-President of the Management Board of PERN S.A. (Poland), Rafał Miland, underlined that the event could become a permanent dialogue platform for Central and Eastern Europe’s key regional players for analysis of the energy and energy-intensive sectors’ futures. In his opinion, the region’s main challenges in the gas sector are the enormous dependence on Russian gas supplies and a subsequent lack of alternative gas infrastructure in the North-South axis. As for electricity markets, Mr. Miland pointed out that traditional generation capacities and the stability of power grids in the region are under severe pressure, due to ageing, low wholesale prices, the rapid expansion of renewables, uncontrolled loop flows, and the EU’s climate policy.

The first of a series of keynote speeches was delivered by Maroš Šefčovič, who stressed that the regions are important building blocks in the European network and essential to a successful implementation of the Energy Union. He also confirmed that such meetings should become a permanent platform for dialogue.  He further stated the importance of looking beyond traditional national interests, whilst increasing the role of the regions and co-operation with the Energy Community members. He praised the CEE region as an exemplary region that has shown solidarity, not only within the EU, but also with partners from the Energy Community, e.g. gas reverse-flows from Slovakia to Ukraine. Mr. Šefčovič asserted that preservation of the gas transit through Ukraine is, and will be, a priority for the whole EU.

He also highlighted the importance and necessity of the further modernisation of infrastructure in the region, and acknowledged his support for future CEE regional interconnection plans. Mr. Šefčovič, in particular, mentioned the Northern Gate project, which has an enormous potential to address many of the challenges faced in CEE.

The Commission’s Vice-President highlighted that, whilst preparing the new legislative package, "Clean Energy for All Europeans", special attention to some of the specific needs of the CEE region was paid, such as decreasing carbon-intensity in industry and energy sectors, along with the problem of energy poverty.

Finally, Mr. Šefčovič concluded that the EU is deeply committed to the stability and integrity of Ukraine, and will maintain its support. The Vice-President underlined that the Nord Stream 2 project is not officially on the European Commission’s table, and asserted that all new pipeline projects must respect EU laws, such as Third Party Access (TPA).

Alexander Micovčin, Deputy Permanent Representative of the Slovak Republic to the EU, speaking on behalf of the Slovak EU Council Presidency, confirmed that the Energy Union is one of the priorities of the Presidency. He pointed out that there is a need to find a balance between the three pillars of the Energy Union strategy: security of supply, affordability, and environmental sustainability. He also pinpointed the main challenge for the CEE – the decarbonisation of industries, and drew attention to the necessity of completing the internal market.

Afterwards, Jerzy Buzek, Member of the European Parliament, Chair of the Industry, Research and Energy Committee (ITRE), argued that energy solidarity in the CEE is urgently required, more so than in the rest of Europe. He stressed the importance of the security of supply, because of weak interconnectivity in the region. The North-South Corridor and completion of the internal energy market had, therefore, become increasingly important projects. In order for the whole EU to benefit, he argued, Member States must act in the spirit of solidarity in all of their dealings, and look beyond national interests. Mr. Buzek also called for more co-operation and solidarity with members of the Energy Community.

Michał Kurtyka, Undersecretary of State, at the Ministry of Energy of Poland, reflected on the Polish Presidency’s programme of the Visegrad Group. He singled out the progress achieved in relation to the implementation of the North-South Corridor with the commissioned Polish LNG terminal in Świnoujście. He also confirmed the readiness of the Polish government to support their Croatian counterparts, to help them to finalise the Croatian LNG terminal in Krk. Mr. Kurtyka also emphasised the Polish government’s concerns over the Nord Stream 2 pipeline project for the CEE region, as it is a direct competitor to the priority North-South Corridor, and endangers the interests of the EU’s partner – Ukraine.

On the European Commission’s recent package, ’Clean Energy for all Europeans’. He argued that the EU has to make sure that it does not undermine the sole right of Member States to define their own energy-mixes: “We need not only clean, but also a secure and competitive package”, he concluded”.

During the interactive discussions, the panelists noted that the gas pipeline network is well-developed on the East-West axis, but not so well on the North-South axis, and the main challenge remains how to connect the three seas: Baltic, Black, and Adriatic. In this context, they mentioned the proposed project of a gas pipeline from Norway to Poland via Denmark, known as the Northern Gate, as being of special interest for the region.

Apart from the required infrastructure, the development of EU procedures supporting energy security is of crucial importance for the functioning of the internal energy market. The projected Nord Stream 2, as well as the European Commission’s recent decision to grant to Gazprom, increased capacity usage of the OPAL pipeline, which is not in accordance with the objectives of the Energy Union, and threatens competition and the interests of the CEE countries, were major issues discussed. It was also underlined by many speakers that the simple replacement of the existing routes of gas supply with other ones, does not necessarily provide full security.  The supply sources have to be diversified, which, in turn, will increase the competition within the CEE.

It was noted that the European Commission, when drafting new legislation, should consider the specific energy-mixes of CEE countries, as some rely on an important share of conventional sources of energy.

The participants of the panel, when discussing electricity markets, noticed some problems in the CEE region, such as loop flows from wind generators from the German grid, which put the security of their national electricity supply at risk and prevent the international electricity market from functioning properly. They touched upon the issue of capacity markets, which need to be technologically neutral and should be concentrated on security of supply, as well as interconnectivity targets, which should be market demand driven, and not fixed to pre-supposed numbers.

The panelists cited the market coupling project 4M MC, which started in 2009, as a good example of regional co-operation. Market coupling allows for higher efficiency of trading and capacity allocation, which leads to a higher security of supply, higher liquidity, and lower price volatility. The 4M MC project demonstrates this model, and also outlines potential for the further integration of CEE countries’ electricity markets.

Participants also acknowledged the importance of both European Commission-CEE countries and the intra-CEE regional dialogues on energy matters. Ultimately, all speakers agreed that more regional co-operation, more interconnections, and more solidarity among all Member States, are all necessary, in order to complete the EU’s internal energy market. This was the prime message emanating from the event.

On December 9th, 2016, Central Europe Energy Partners (CEEP) organised in co-operation with the European Commission, and with the support of the International Visegrad Fund, the first edition of the Central European Day of Energy. The event took place in the premises of the European Commission, and was prepared in close alliance with CEEP’s partners from the V4 countries and Ukraine: the Center for Social and Economic Research (CASE), Poland; the Research Center of the Slovak Foreign Policy Association (RC SFPA), Slovakia; The Institute for Foreign Affairs and Trade (IFAT), Hungary; The Institute for Politics and Society (IPS), the Czech Republic,and the Razumkov Centre, Ukraine.