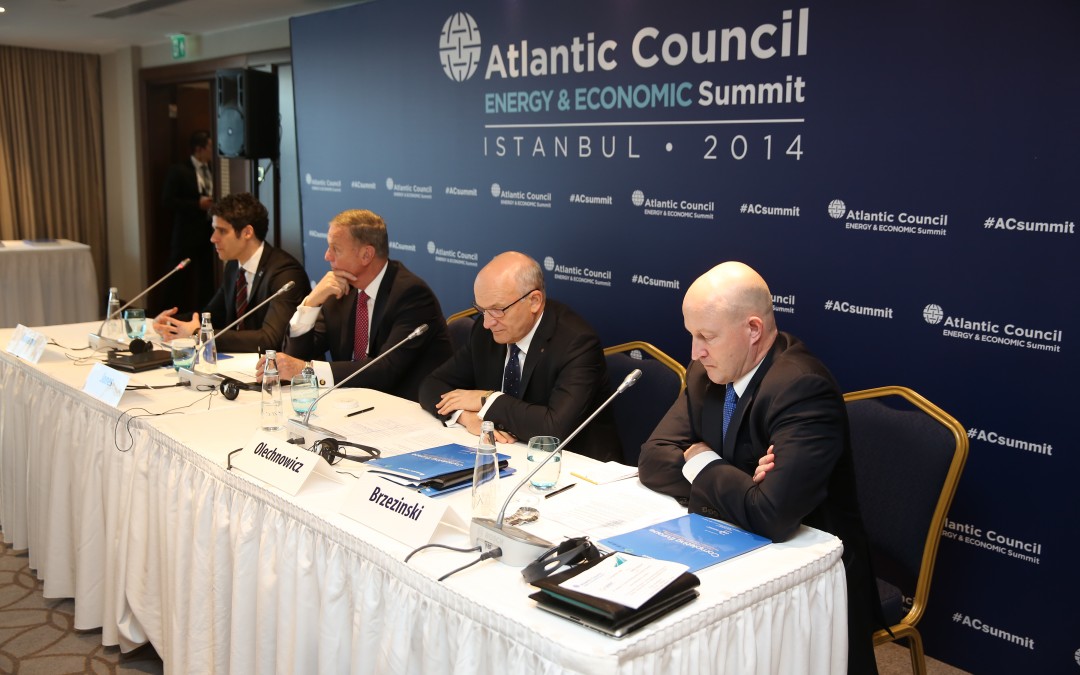 Economic growth and energy security are the backbones of the European Union’s resilience, but are both the weak spots in the chainmail of Europe. A raft of new projects will help Europe diversify its energy supply and security over the medium and long-term, concluded experts present at the Atlantic Council Energy and Economic Summit’s in Istanbul, Turkey.

Opinion leaders from politics, media, academia, and the corporate world gathered for two days of talks on how governments and companies manage emerging risks and uncertainty in today’s turbulent times.

Panelists discussed a number of factors that make it difficult for Europe to wean itself off Russian gas in the near-term. Europe is plagued by a lack of affordable alternatives to Gazprom, and until projects like the Southern Corridor are completed and the United States begins exporting liquefied natural gas (LNG) to Europe in larger quantities, the majority of European energy imports will continue to flow from Russia.

On the same time, one should not forget that we do not speak about a one way dependency, but rather a co-dependence likely to continue for the foreseeable future.Alan Riley, Professor of Law, City University of London, discussed the ways in which Gazprom is still very much dependent on Europe, as the planned Russian-Chinese pipeline is still years from completion and the two countries have yet to strike an accord on splitting the costs and responsibilities for construction. Until the pipeline construction is completed, “China is a very difficult place for Gazprom to deliver gas profitably,” he explained. With larger shipments to East Asian markets still a pipe dream, Russia will need to continue to sell to Europe, keeping their leverage in check.

The US Vice-President Joseph Biden pointed to the eastern Mediterranean as a critical strategic resource for bolstering Europe’s energy security. The development of the Southern Corridor and new projects in Turkey and Cyprus could make the region into a key hub for European energy markets that Biden called a “major asset.”

Launch of the Completing Europe Report
The chairman of the Board of Directors of CEEP, Mr. Paweł Olechnowicz, and General James L. Jones, President of Jones Group International, and Founding Chairman of the Brent Scowcroft Center on International Security, Atlantic Council, co-chaired a presentation of the report: ‘Completing Europe – from the North-South Corridor to Energy, Transportation and Telecommunications Union’.

The report was drafted in co-operation with the Atlantic Council. When undertaking this major project, Central Europe Energy Partners and the Atlantic Council both wanted to highlight the critical elements in the process of addressing the weaknesses and completing Europe. This report is intended to give renewed priority to plans for a North-South Corridor of energy, transportation, and telecommunication routes linking the Baltic, Adriatic, and Black Seas.

The chapters on energy and transportation detail the major infrastructure projects in Central Europe, both currently underway and planned, as well as their financial requirements and regulatory environments. They identify those projects whose completion is most urgent to the North-South Corridor. The chapter on telecommunications explores how the North-South Corridor can be leveraged to further bridge the digital divide that continues to exist in Europe. The chapter on finance examines those budgetary and commercial challenges confronting the North-South Corridor, and lays out a menu of financial options that can be leveraged to transform the corridor into reality. Each chapter’s recommendations are addressed to policymakers at national and regional levels in the European Union, policymakers in the United States, and decision-makers in the business sector.

“The North-South Corridor, spanning from the Baltic to the Adriatic and Black Seas, is critical to the creation of a single European market. Although the accession of Central Europe’s countries to the European Union has contributed largely to the end of division of the continent, this task is far from finished. Europe’s economic woes, as well as new security challenges add to the urgency of completing and consolidating the European integration. This is why reanimating, accelerating, and resourcing the project of a North-South Corridor of energy, transportation and telecommunication across Central Europe must be a top priority for the European Union and its Member States, as well as the transatlantic community,” said Paweł Olechnowicz.

"Energy binds us together,” said James L. Jones, “[it] touches every geostrategic issue that we talk about.” Russian aggression, he posited, could be curbed by a long-term strategic response to the energy security threat that Russia poses. “There can be no security without prosperity and no prosperity without security,” he explained, adding that the North-South Corridor could be a vital contributor to both prosperity and security for all of Europe.

Jones told the audience that the primary obstacle to the corridor’s completion was marshaling political will and financial resources to see the project through to completion. “A vision without resources is just a hallucination,” he said.

Olechnowicz noted that the corridor would not only unify Europe’s north and south, but also the west to east. “We have to deliver, and find the proper resources to implement this vital project.”

Watch the recorded video of the presentation