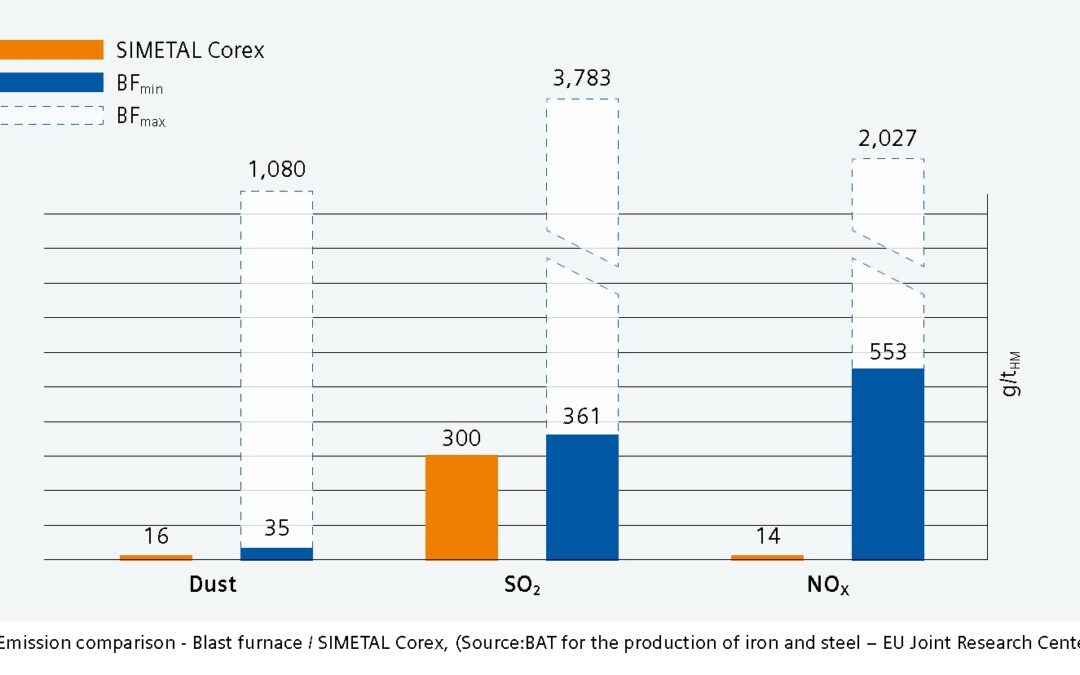 The underlying aims of EU environmental policy are to enhance natural capital, promote a resource-efficient economy, and safeguard the health of the people. The EU perceives environmental and economic considerations as being complementary, like two sides of the same coin. Greening the economy reduces environmental costs through more efficient use of resources, while new environmentally-friendly technologies and techniques create employment, give a boost to the economy, and strengthen the competitiveness of the European industry.

At the same time, we are living in a world of great dependence on power supply, where blackouts are the biggest risk to the economy of any country and can impact on huge parts of the population. Therefore, proposals to support the target of a 27% share of renewables in power production or improving conditions for the introduction of carbon capture and storage technology (CCS) at the EU level become more than relevant. In terms of the electric power system, a single element is able to affect the functioning of the entire system. So, if finance is the nervous system of the economy, energy is most certainly its blood.

Therefore, we have to think globally, too. We are not rich enough to invest in projects for simple problem-solving like CCS or reward power producers for the more efficient burning of coal. Coal is a resource of limited value and projects based upon its usage should have a strong multiplication effect, as well as efficiency of utilisation. In this article, I shall promote the merits of Corex technology because it could be a far better cost-effective solution for industry than the above-mentioned CCS, which is still not commercially-viable. The Corex process is an environmentally-friendly alternative to the traditional blast furnace technology, which, for instance, is generally used in Silesia.

Before delving into the advantages of Corex technology, let’s first take a quick look at Silesia, a critical area, in need of urgent development, where Corex could, in fact, be applied. It is a region covering parts of three countries: Poland, the Czech Republic and Germany. It has about 40,000 km2 and almost 8,000,000 inhabitants. The wide-ranging production of coal and iron in Northern Moravia and Silesia began in the 17th century. The rapid development of iron production in the 19th century in the region was achieved mainly due to two factors – the use of coal in metallurgy and the invention of the steam locomotive. In the 1970s, Silesia became one of the world's largest producers of coal. Coal mining declined during the next two decades, but increased again following the end of Communist rule.

The glory of coal as ‘black gold’ is gradually becoming a thing of the past. Thermal coal prices are just above five-year lows, as a result of a global supply glut and weak demand from leading consumers. A number of Poland's top coal mining companies, such as JSW, along with NWR in the Czech Republic, are suffering losses, as lower prices hit their profitability. Steel production has fallen by almost 30%, and its restart is hampered, not only by the global market situation, but also by forthcoming EU environmental measures, as well as national measures.

Silesia has now become an area with a high unemployment rate, debts, and slow growth, if there is any. The problems of the region are not only ecological and economical, but also social, with several industries linked to and reliant upon the coal and metallurgical industries. A solution to the critical situation in the region could be effective investment in projects which cover coal, metallurgical, and power production industry needs, as well as the environment. The ideal technology could, therefore, be Corex.

The worst air in the country is to be found in the Moravian-Silesian region. Its quality is affected by traffic, industry, heating in households, and sources from neighbouring Poland. The biggest problems are in autumn and winter. For example, on December the 10th, 2014, smog affected the entire region and in some places, there were daily air pollution limits, as airborne dust exceeded its desired limits several times. So, it’s worth looking at comparisons between Corex and blast furnaces, to see what an impact can be achieved on dust levels and other emissions. See the chart below. 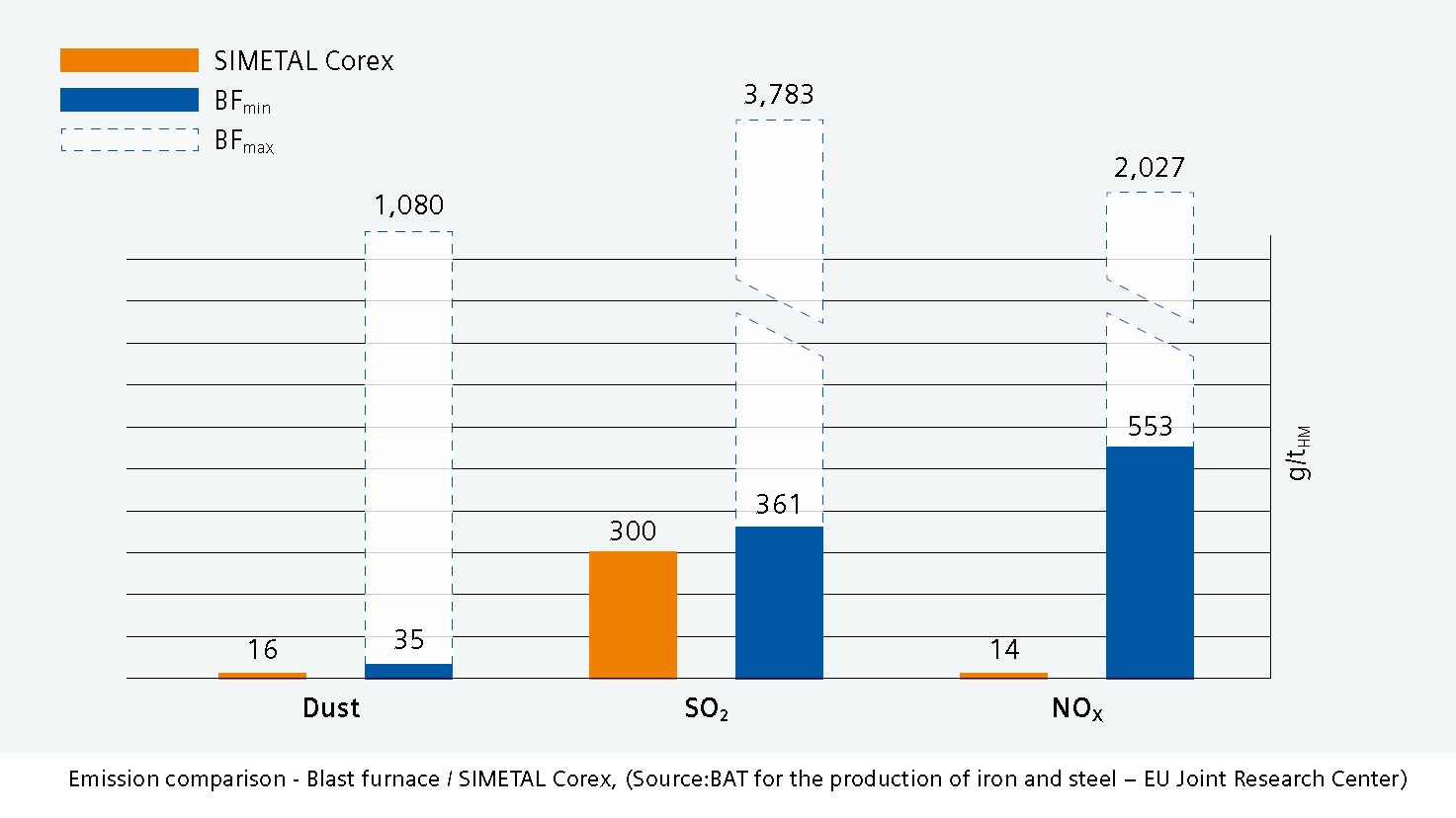 As the chart shows, SIMETAL Corex reduces the levels of dust and NOx massively, whilst having a significant impact on levels of gaseous SO2. The nitrogen levels are diminished via the use of pure oxygen. When the nitrogen-free export gas is used in a combined-cycle power station, it can be converted to electrical energy with efficiencies of up to 46%. The Corex process can typically save operators up to 10% in hot metal production costs. It also crucially frees them from the need to invest in the erection, operation and maintenance of coking and sinter plants because these additional facilities are not needed at all. Corex not only provides operators with the key technology for producing hot metal in an economically and ecologically sustainable manner, but it is an industrially and commercially-proven solution.

Non-coking coal can be used directly as a reducing agent and energy source, with up to 80% of the iron oxide fraction being lump ore. No sinter plant is necessary for optimal operation. High quality metal can be produced form the non-coking coal, and be environmentally-friendly at the same time.

The SIMETAL Corex values are already far better than expected future standards, whilst the full development of the potential of the SIMETAL Corex process has not yet been realized with respect to a further reduction of emissions. It is being used in India, China, and South Africa, so why not Europe? On this continent, it is difficult to find any information about support for Corex or another clean coal technology for steel producers. Perhaps in Europe, there is still a lot of faith in CCS, but is it “wise to put all your eggs in one basket?” Why doesn’t the EU examine the Corex experience more closely? It could take a leaf from the book of JSW Steel, the first Indian Company to use the Corex technology to produce hot metal. This company points out on its website: “we went for this technology, although it was untested in Indian conditions, due to its benefits to the environment”. So, for JSW Steel, a gamble paid off: will the EU be so brave?

Mr. Jiří Michalik is a member of the Board of Directors of the Association of Energy Managers (AEM), founded in 1992. AEM (Asociace Energetických Manažerů) is as an independent, non-governmental and non-profit association of managers from the energy sector.