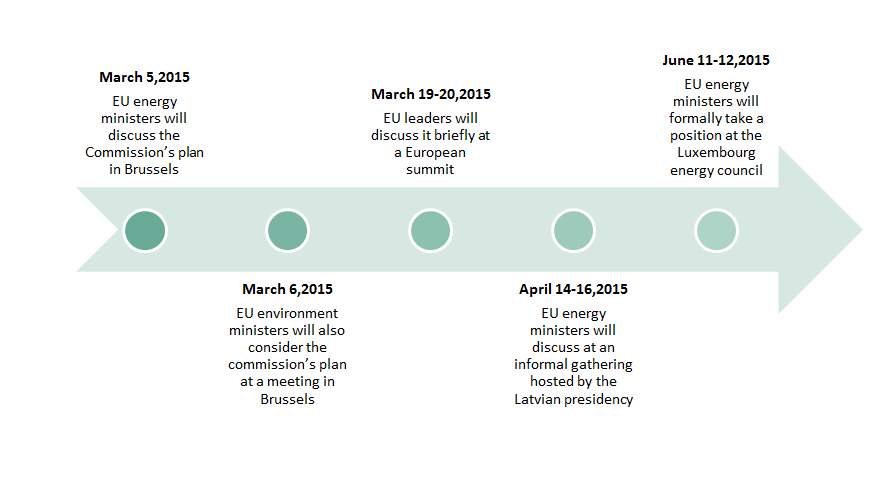 On February 25, 2015 the European Commission published its’ Energy Union Package. It includes the following documents:

In this Communication the Commission sets out, in five interrelated policy dimensions, the goals of an Energy Union – and the detailed steps the European Commission will take to achieve it, including new legislation to redesign and overhaul the electricity market, ensuring more transparency in gas contracts, substantially developing regional cooperation as an important step towards an integrated market, with a stronger regulated framework, new legislation to ensure the supply for electricity and gas, increased EU funding for energy efficiency or a new renewables energy package, focusing European R&I energy strategy, reporting annually on the 'State of the Energy Union', just to name a few.

A Communication setting out a vision for a global climate agreement in Paris in December 2015. The vision is for a transparent, dynamic and legally binding global agreement with fair and ambitious commitments from all parties. The Communication also translates the decisions taken at the European Summit in October 2014 into the EU's proposed emissions reduction target (the so-called Intended Nationally Determined Contribution, or INDC) for the new agreement.

The Energy Union Strategy is built around five mutually-reinforcing dimensions:

WHEN IS THE PROPOSAL LIKELY TO COME INTO EFFECT?

So far as for the facts. And now some early thoughts on my side.

Proposals by the European Commission to bring together the energy systems of Member States into a single Energy Union represent the most ambitious attempt to date at harmonising energy networks across borders. An Energy Union has been under discussion for more than a decade, with successive national governments and European Commissioners debating how such a system could be made to work in practice. On the face of it, the signs are good. But we all have to be clear: this is only a first step in the right direction. The Energy Package adopted by the Commission offers a comprehensive view of the energy challenges to be addressed by the EU. Current events only help highlight even further the urgency for Europe to increase its energy security, its diversification of resources, the need to unite a fragmented market and speak with a stronger voice in energy and trade negotiations with third countries.

An Energy Union would involve sweeping changes to the way energy systems currently work and it makes sense from a political, security and economic perspective. But as well as being a practical and technological project, energy union has a huge political dimension. As the European Commission sets out its plans to harmonise the energy systems of Member States, despite the potential benefits, there remain huge barriers to success. Without doubt - governance will be a sticking point. Striking the right balance between granting the EU powers while respecting subsidiarity - the allocation of powers and responsibilities - will be a challenge.

The proposals look notably centralising at a time when the European project is not universally popular, and may therefore require considerable political capital, if it is to be achieved. There is a number of things here which have been said before (such as the need for greater interconnectivity), and there are not many indications yet, as to how previous obstacles will be overcome. The Energy Union Package sets out a strong vision for Europe’s energy transition. This vision is the right one for safeguarding Europe’s energy and climate security. Central Europe Energy Partners supports the European Commission’s commitment to revitalise energy policy and to strengthen the EU’s ability to act in this field.

The proposed holistic approach is a good foundation to balance the EU’s energy, climate and industrial challenges better than in the past. But important trade-offs will have to be addressed in the implementation of the strategy. We will attentively watch future developments and decisions. What we expect is concrete action - among other things - on the challenge of high energy prices, which is undermining the competitiveness of the energy and energy-intensive sectors – CEEP Members. Europe is emerging from a deep financial and economic crisis and it is widely agreed that stronger European industrial competitiveness is vital as a driver for economic growth and job creation.

In this regard, while ensuring the achievement of essential climate and environmental objectives, it is now imperative to recognise and to ensure that an Energy Union is shaped in such a way as to guarantee, not only diversity and security of supply for all consumers, but also stable and affordable energy prices for all European businesses. The biggest contribution Energy Union can make is to move Europe further along the path towards a single energy market. Progress towards a more connected and competitive natural gas market is producing clear benefits but much more can be done.

As I see it, the focus on implementation of internal market rules is also proving to be Europe’s most influential lever in external energy security. We appreciate the fact, that the concept of regional markets and regional cooperation is high on the agenda – infrastructure/interconnector included. CEEP has been founded on and stands for regional cooperation principle, in support of European energy and energy security policy. In our CEEP Position Paper on an Energy Union we have stressed the importance of working out a concept of a single EU gas buyer. The Commissions’ proposals are different in this regard. But CEEP still holds to its’ opinion, that the Commissions’ approach provides a good working platform for further deliberations. At the same time – it is with regret – that we notice no reference made to oil and oil-products. A reform of the EU ETS by introducing a market stability reserve is high on the Commissions’ agenda. CEEP upholds its’ different opinion and position in this regard and we will again be presenting it in due time.

The cards are on the table, and further discussion on the Energy Union will put the flesh on the bones. At the moment, nothing is etched in stone but vision has been presented. Next months (or years) will tell the future of the Energy Union, and the European Union.

The Energy Union Package marks only the start of a deeper debate. CEEP wants to be active throughout it and make sure our Members’ voice is heard and considered. The issue will be of utmost importance to the Commission and I have no doubt that COMM’s ultimate success would finally be judged on the progress it makes with Energy Union project.