Energy Union, the EU and the energy sector 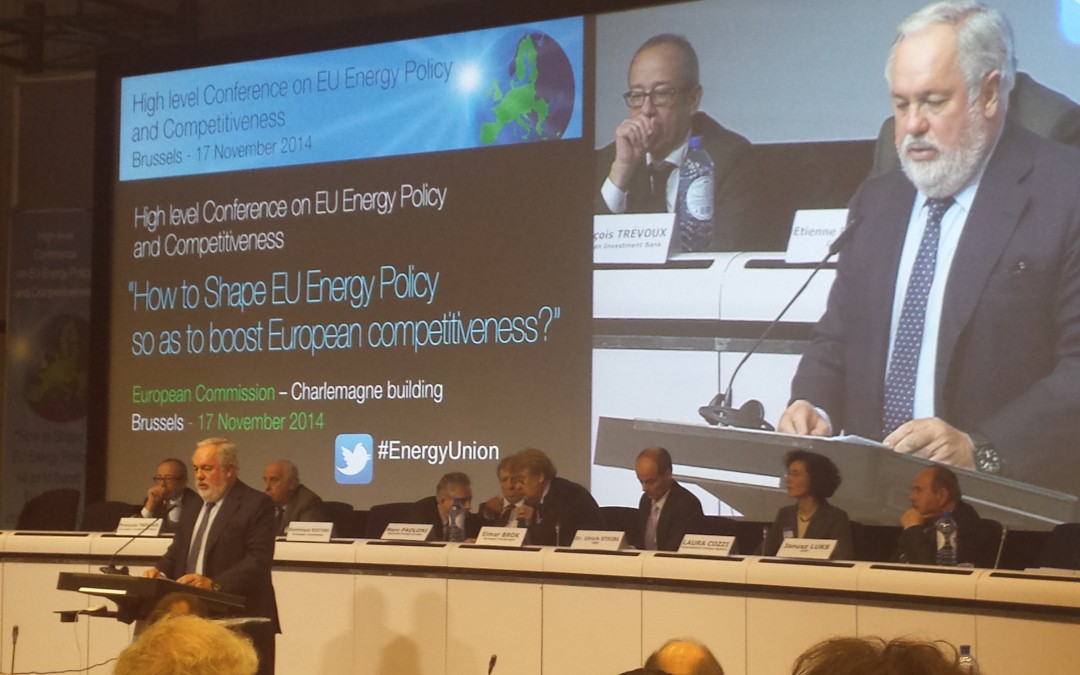 A conference on EU Energy Policy and Competitiveness, organised in Brussels on the 17th of November, exposed the discrepancies between the still theoretical concept of Energy Union and the actual fragile reality on the energy ground.

The event attracted high-level representatives of national and European institutions, authorities, industry, research centres, academics and civil society who analysed and discussed the crucial and sensitive components of an EU Energy Union – a body that is able to contribute to boosting European industrial competitiveness.

After the 2014 Ukraine crisis and the appointment of the new European Commission, a new political momentum has emerged in the EU regarding the need to create a truly European energy policy, with both the new President of the EU Council, Mr. Donald Tusk, and the new EU Commission calling for the creation of an EU Energy Union. Let us not forget Prof. Jerzy Buzek, Chair of the ITRE Committee in the European Parliament, one of the most fervent and original supporters of the project.

During this high-level conference, the newly named Vice-President for Energy Union, Maroš Šefčovič, stressed that we are facing new realities when it comes to energy markets and that the actual situation is fragile. In his vision, the Energy Union should be built, putting in place a more holistic approach across energy policy structures in order to speed up the process. Furthermore, he stressed the fact that a lot has already been done, an energy security strategy has already been approved by the Council, whilst the 3rd Energy Package is already in existence and should be implemented.

The Vice-President for Energy Union offered a first glimpse of what Energy Union means and presented its five pillars.

[Tweet "Mr. Šefčovič emphasized the necessity to diversify the suppliers, the routes and the sources"]“We are the biggest energy consumer in the world. We pay our bills on time," he told the conference, underlining the need to speak with one voice, to increase transparency and co-operation to better resist pressure. "We should do our best to explore the common purchasing of gas with full respect for the competition," he continued, explaining that, at this stage, we should look for a step-by-step approach on a voluntary basis as a starting point.

Mr. Šefčovič emphasized the necessity to diversify the suppliers, the routes and the sources, working harder on the Mediterranean gas terminals and Southern Gas Corridor, for example.

Later, during the debate, Jerzy Buzek reinforced this idea reminding everyone that energy also means security, not only competitiveness, and that one should not forget about the solidarity principle. “We need more Europe”. On the same subject, the MEP, Claude Turmes, reminded attendees that the biggest non-achievement in energy policy is the high amount of hidden subsidies and pleaded for a more daring and transparent Europe.

A functional robust internal market in which companies and technologies freely compete to provide the best services at the lowest price, while respecting societal and environmental constraints, could be hugely welfare enhancing. Maroš Šefčovič pointed out that for the next period, the EU will look for mature projects, be ready to deploy, and able to attract private investments, too. A representative of EUROGAS stated that “we want to see more market and more trust in the security of the market”.

On the same topic, the Vice-President of the European Parliament, the Romanian MEP, Adina-Ioana Vălean, strongly asserted that industries and the markets know how to regulate the price of energy, “we, the policy-makers, should take care of having a good framework”. A point reinforced by the President of Genfina, Groupe GDF Suez, Etienne Davignon, who said that the market needs to “have the security, to know the rules and how they apply.”

The Vice-President for Energy Union reminded delegates that the EU is a window display attractive for its global partners, and it should call all the others to meet its high targets. This point was further discussed by Prof. Buzek, who explained that the goal is to diminish the emissions of CO2 not to use less coal, oil or gas.

Under this pillar, Maroš Šefčovič mentioned the Horizon 2020 programme.

The Vice-President for Energy Union ended his speech on a very optimistic note, declaring that “we know how to do it and what to do, so let us just do it”.

On the other hand, the energy sector representatives pointed out the lacking aspects and weaknesses of the current situation. The Secretary-General of EURELECTRIC, Hans Ten Berge, argued that we are far from an “integrated European approach”, that we lack the infrastructure and the technology for such a purpose; the “national approaches” are still a common rule. Hans Ten Berge and others asked for all the above-mentioned failings to be taken into consideration, to set clearly the rules, to get rid of State intervention in energy prices and pleaded for a stronger ETS system.

[Tweet "The CEO of CEEP, Janusz Luks, outlined the mismatch between the ambitions and the available tools"]A never-ending opposition

This conference exposed once again the “battle” between the different sources of energy with its three branches: traditional energy sources, renewables, and those who plead for the neutrality of differentiation between resources.

The President of the European Alliance to Save Energy, Ms. Monica Frassoni, specified that energy efficiency and renewable energy should be at the forefront of Energy Union. On the other side, the President of Euro Geo Surveys, Mart van Bracht, underlined that “the EU still needs fossil fuels for the coming decades, and lots of it can be produced by us.”

The Vice-President of EU Affairs, and Total Thierry Reveau de Cyrières, insisted that “we will need all energy sources and should not oppose any forms of energy. We have a risk of a lack of energy, not the situation where we can choose between sources of energy.”

The CEO of CEEP, Janusz Luks, outlined the mismatch between the ambitions and the available tools, and stated that the global demand of energy will continue to increase. Therefore, the question of energy security will remain on the table. Hence, we need many sources of energy and the status quo is not an option for the EU.

The Commissioner for Climate Action and Energy, Miguel Arias Cañete, closed the event with a message perfectly matching the introductory note of the Vice-President for Energy Union, Maroš Šefčovič. Arias Cañete reaffirmed that energy is a powerful instrument to create jobs, it’s the key for the security of supply and competitiveness, that Europe should speak with one voice and the solidarity should not stop at the EU’s borders. The Commissioner also mentioned that a strategy paper on Energy Union will be presented in the first trimester of 2015. Hence, the Presidency of Latvia, starting in January 2015, will make it a priority.

All in all, the ‘Energy Union’ topic is on everybody’s lips in Brussels, and all seem to agree that something should be changed, and will be changed, given the momentum. The next step would be to get this “something”, which already has a name – ‘Energy Union’- from a concept into reality. One should not forget that Europe’s Founding Fathers had foreseen that energy would represent a major instrument to build co-operation and solidarity among European States.