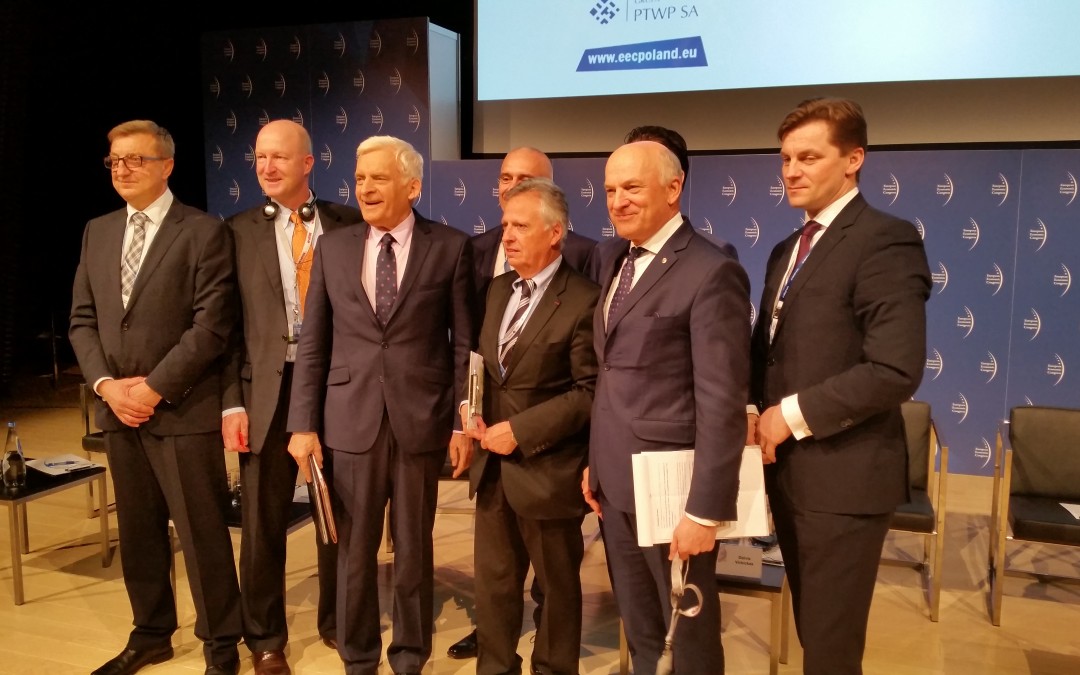 A fundamental transformation of Europe’s energy sector is needed in order to provide EU Member States with secure and affordable energy. This is the main conclusion of the ‘Completing Europe – from the North–South Corridor to the energy, transportation and telecommunications union’ debate that took place on April the 21st in Katowice (Poland). Panellists representing both European energy markets and public institutions expressed their support for the North–South Corridor proposal from the recently-published Central Europe Energy Partners (CEEP) and Atlantic Council report.

The report’s main recommendation is to create an integrated set of energy, transportation and digital links across Central Europe. As perceived by CEEP and the Atlantic Council, the network should stretch from the Baltic to the Adriatic and Black Seas. Its energy component features a gas pipeline from Świnoujscie (Poland) and Klaipeda (Lithuania) to Krk Island (Croatia), with proper LNG facilities. Other key energy projects include a set of Balkan interconnectors that reach into Serbia, Macedonia, Bulgaria and other nations, as well as the East–West Corridor Gas line that stretches from Germany through Poland and into Ukraine.

The North–South Corridor is needed, not only for the sake of energy security, but also for diversified energy sources at affordable prices. “As the Central Europe Energy Partners, we understand that access to competitively priced energy is one of key drivers of the economic growth. With both energy producers and energy-intensive industries on board of our organization, we work hard to empower consumers by providing them with choice and creating flexibility to manage demand and supply. The network of energy lines, transportation routes and telecommunication links that we envision stretches from the Baltic to the Adriatic and Black seas. It greatly enhances supply security through constructing infrastructure to deliver new sources of gas, oil and electricity to the continent. This is indeed a highly complex project that demands engagement of and co-ordination from numerous partners. That is why a resolute action at the EU, and not only regional level is needed. A support for this process through available Community funding instruments should be reinforced, and European financial institutions should be fully involved,” said Paweł Olechnowicz, Chairman of the Board of Directors of Central Europe Energy Partners.

The integration of Western and Central Europe should be strengthened, not only through treaties and political steps, but also via investments in the energy infrastructure. “The effort to build a Europe whole, free and secure must continue. A key foundation stone of that vision is the completion of a single European market. This is not just a question of political and regulatory cohesion. It is also very much a matter of infrastructure that will bind together the economies of Central Europe and that region to Western Europe. The North–South Corridor is critical for that vision to be fulfilled. If implemented, the Corridor will provide the EU and the whole trans-Atlantic community with strategic benefits. In addition to integrating the economies of Central and Western Europe, it will enhance Europe’s energy security, in part by diversifying its energy supply. The Corridor will also increase the economic competitiveness and resiliency of Europe as a whole in the global market place. Last but not least, the efficiencies provided by the North–South Corridor will help Europe meet its climate goals,” asserted Ian Brzezinski, Senior Fellow at Brent Scowcroft Center on International Security, Atlantic Council.

The main challenge before the North–South Corridor is a long-standing one – getting members of the EU to agree on the prioritisation of this project. “More than ten years since the EU’s biggest enlargement, we see that the continent is still not fully connected, with energy and resources not being able to flow freely to wherever they are needed. Western Europe has been successfully integrating for more than half a century, also in terms of infrastructure connections. Yet, the post-2004 Member States in Central & Eastern Europe still have substantial catching up to do in this regard - in becoming interlinked both with the west and along the strategic north-south axis. We need the North-South Corridor to bring together the Baltic, Adriatic, and Black Sea regions, but also to integrate the whole of the EU, and our neighbours in the Energy Community, into one coherent internal energy market. A market in which industry can prosper and bring new jobs to the continent, and where consumers can benefit from lower energy bills,” proclaimed Prof. Jerzy Buzek, Chairman of the European Parliament’s ITRE Committee.

The North–South Corridor puts key emphasis on the development of the infrastructure in the energy sector. “As owner of electricity infrastructure, we also see the responsibility and understand the importance of our role in connecting markets, which will bring new opportunities for our businesses and finally will benefit our societies from the whole region,” emphasised Daivis Virbickas, Chairman of the Management Board and CEO at Litgrid, Lithuanian electricity transmission system operator.

The North–South Corridor will stimulate the creation of a single gas market and strengthen security of gas supply in the region. “In Poland, the Corridor will feature extensive infrastructure in the Western, Southern and Eastern parts of the country. Thanks to that, our system will be effectively linked to the ones of our neighbours and allow Poland and other CEE countries to be supplied from the global LNG markets. As the largest transmission system operator in the region, we will be able to thoroughly modify the gas supply scheme in Poland and create technical possibilities to transport gas through Poland to Central Europe,” highlighted Jan Chadam, President of the Management Board of GAZ-SYSTEM.

While global oil markets are undergoing dynamic change, the political situation in a number of countries is far from stability. “If the European economy is to continue being competitive it needs to be provided with security of energy resources supplies. The road to this goes also via Gdańsk, where a modern oil terminal is being constructed by PERN “Przyjaźń”. It is going to diversify the supplies of hydrocarbons but also serve as the first real step – in the fields of oil – towards creating the North–South Corridor from the Baltic to the Mediterranean. This would largely enhance the security of supplies in the region and improve its competitiveness in the global markets,” added Dariusz Zawadka, Vice-President of the Board of PERN “Przyjaźń”.

The total cost of the backbone and strategic projects within the North–South Corridor project equals €50.5 billion. From this amount, €27 billion would be allocated for the cost of projects for the energy sector (oil, gas, electricity), €20 billion for transport, and €3.5 billion for telecommunications. These figures are only a small portion of the infrastructure investment needs up to 2020, in the range of €1.5-2 trillion (or an average of €150–200 billion annually), outlined by the European Commission in 2011. To provide a strategic and long-term energy security in Europe will cost about one-third of the annual budget of the European Union for infrastructure.