Sooner or later – a European Energy Union will emerge 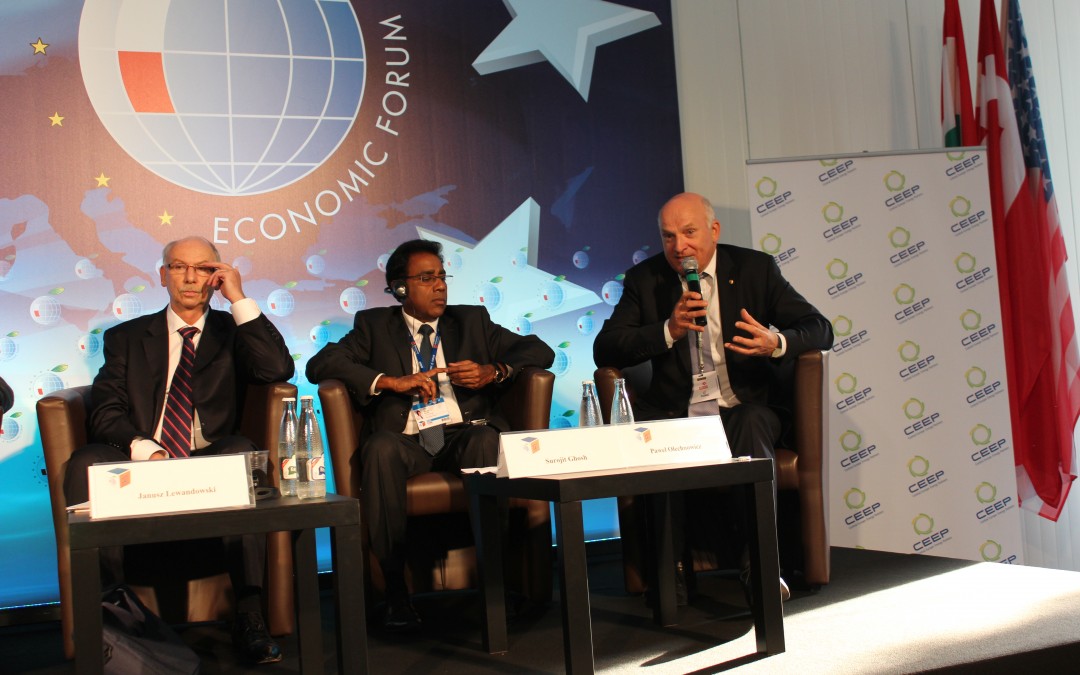 Europe should accelerate its release from one main supplier of gas. We need a strategy for energy security and for diversification of suppliers, of sources and of routes. This subject, together with the idea of an Energy Union and other significant challenges for Europe, were discussed at the XXIVth Economic Forum in Krynica-Zdroj, Poland, where CEEP was present.

Central Europe Energy Partners and our partner, Grupa LOTOS, hosted the panel discussion:“An Energy Union for Europe – Competitiveness, Growth, Security and Solidarity”, chaired by Paweł Olechnowicz, President and CEO of Grupa LOTOS SA and Chairman of the Board of Directors of CEEP.

The discussions were led by the moderator,Günter Verheugen, former Vice-President of the European Commission and Commissioner in charge of Enterprise and Industry and Enlargement. Also taking part were: Janusz Lewandowski, Member of the European Parliament and a former Commissioner for Financial Programming and the Budget; Dariusz Marzec, Vice-President of the Management Board for Development, at PGE; Dr. Frank Umbach, Research Director of the European Centre for Energy and Resource Security, EUCERS, at King’s College in London; Surojit Ghosh, Member of the Board of Directors, ArcelorMittal Poland; Olivier Randet, Chairman of the Management Board, Air Liquide Poland; and Alexey Tsymbal, General Director, PJSC Sumy Frunze NPO, Ukraine.

The question of energy independence gained in importance due to the political situation and the ongoing crisis in Ukraine. Europe should use this momentum to accelerate its release from one main supplier of gas. Europe needs a strategy for energy security and for diversification of suppliers, of sources and of routes.

According to the panellists, a European Energy Union will be established, sooner or later, and it will bring the following advantages:

o   The possibility to negotiate energy supplies and an increase in the European Union’s bargaining power, for the benefit of all Member States;

o   A mechanism of gas solidarity, in case of crisis;

In order to achieve these goals, the EU needs:

In conclusion, the European Union is heading in the right direction, as it has already begun to construct interconnectors between countries, building LNG terminals, and providing greater reserve storage facilities. This shows that the first big steps towards an Energy Union have already been completed.

The Economic Forum in Krynica-Zdroj, Poland, is an annual gathering for the political, economic and intellectual elites from Central and Central Europe to talk about the future of Europe and the rest of the world, and Energy is always regarded as one of the main topic areas of the Economic Forum.