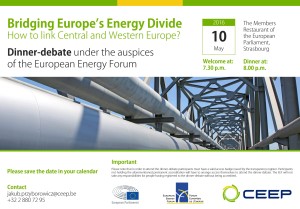 Central Europe Energy Partner as a Member of the European Energy Forum will organise the dinner debate to present the vast political, economic and social benefits that would be brought to the whole continent by linking the energy, transport and digital infrastructure in countries from Central European region with other member states from Western Europe.

The construction of the North–South Corridor, by bolstering the connectivity, competitiveness and security of the EU-11 and the European Union in overall, is one of the key enablers for completing the European integration process paired with a new approach to energy infrastructure projects. It would connect Central European markets, both with each other and the Western part of the continent. This project could comprise a set of interrelated gas, electricity and oil transmission infrastructure projects within the Central European region.