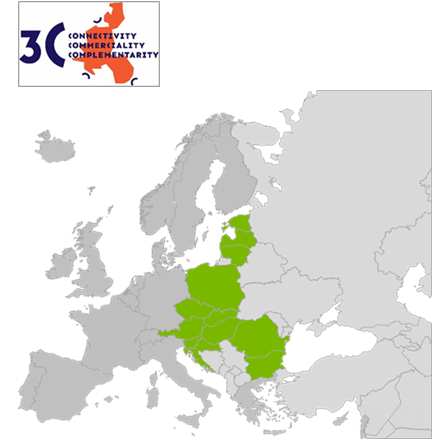 Three Seas Initiative (3SI) is a flexible forum for cooperation between heads of state, designed to offer political support in order to foster a more effective cooperation of governments, business entities and non-governmental organizations interested in boosting regional bonds. One of the key areas of cooperation are projects related to energy infrastructure.

3SI Warsaw Summit’s joint declaration underlines the interlinkages and coherence between this project and the policies of the European Union in the field of energy and transport. It explicitly mentions that this project is a mean of the implementation of the Union’s Energy policy objectives. This aim is going to be achieved by the development of energy infrastructure connections in Central Europe, which will pave the way for market integration and which will increase the resilience of participating states.

In the energy sector, the 3SI participants are involved in two different distinct macro-projects. First foresees connecting the Świnoujście LNG terminal in the Baltic Sea with the one under construction in the Adriatic island of Krk. While completed, it would allow LNG to be shipped from the United States, Norway, Algeria or Qatar – to name just a few major exporters – and enter the European energy market through a new route, spanning North-South across the continent.

Second, BRUA gas pipeline would permit Caspian gas to reach Europe via Turkey (given that the TAP is due for the inauguration this year), guaranteeing an alternative to Russia’s quasi-monopoly on the (Eastern and Central) European energy market. Another planned source is the gas from the Romanian offshore in the Black Sea. Its end-route point is none other than the Austrian hub which is able to ensure the redistribution of natural gas throughout the entire continent.

Both of these projects are important initiatives of the cooperation framework and aim to ensure a greater diversification of energy inputs not only for the 3SI region itself but also for the entire European Union.

Full report prepared by OSW Centre for Eastern Studies and New Strategy Center:
The emergence of a European project. Three Summits for the Three Seas Initiative.