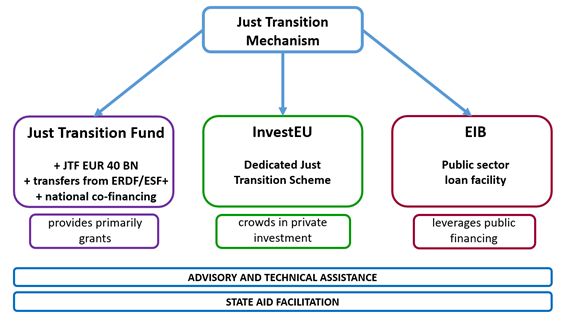 With the European Green Deal (EGD) the EU wanted to become the first climate neutral continent within 30 years, by mobilising research and fostering innovation, financing the transition while also making sure that no one is left behind. In March 2020 everything changed for Europe – all priorities and debates were pushed aside by the outbreak of COVID-19. Member State after Member State went into lockdown putting entire sectors of the economy on standby. By the end of May the Commission proposed to create a new recovery instrument, Next Generation EU, embedded within a revamped long-term EU budget. The crisis forced some changes and accelerated other decisions within the European policies. The European Green Deal became therefore a core part of the EU's recovery strategy and its key areas are:

Next Generation EU with a total amount of EUR 750 bn, as well as targeted reinforcements to the long-term EU budget for 2021-2027, will bring the total financial firepower of the EU budget to EUR 1.85 trillion. Still, the EGD means first of all raising not only public but private investment – it will not all be coming from the EU budget. Secondly it is an unprecedented plan, so a number of adjustments can be expected. Thirdly close cooperation between public and private entities is needed to properly coordinate actions.

The Just Transition Mechanism, worth now EUR 150 bn of investments for 2021-27, breaks down into the following (see Figure 1): 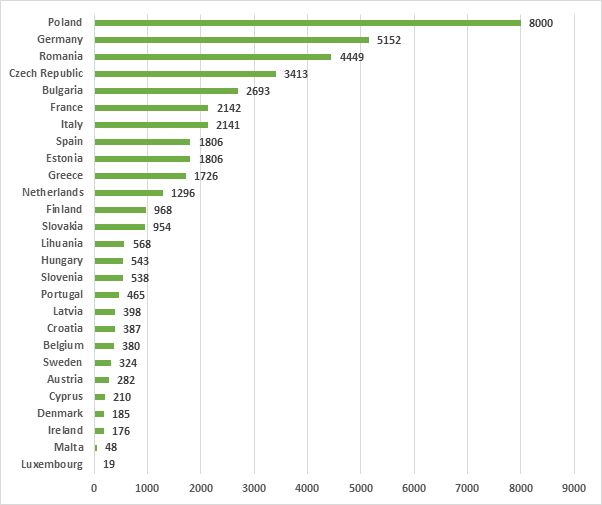 ‘The Just Transition Fund (JTF) is the first of the pillars of JTM to be implemented under cohesion policy. The aim of the JTF is to mitigate the adverse effects of the climate transition by supporting the most affected territories and workers concerned.’

The Just Transition Fund is the most debated element of the Green Deal, as it will include dedicated “fresh” funding. Its total amount was increased to EUR 40 bn, of which:  EUR 10 bn under the next long-term EU budget and EUR 30 bn from Next Generation EU. The allocation of the funds is based mainly on industrial GHG emissions of regions with a high carbon intensity and employment in industry on regions with carbon-intensive industry (see Figure 2).

The objectives of the fund is to support territories facing economic and social transformation in their transition to a climate-neutral economy (art. 2). Each Member State will receive resources from the JTF and on top can co-finance investment between 1,5 to 3 times the amount from the cohesion funds.

The fact that the JTF will be implemented under the cohesion policy (Common Provision Regulation) has some important consequences. On one hand the focus will be on up-skilling and reskilling of the affected workers and investment in SMEs. On the other art. 3 says – the JTF shall support the Investment for jobs and growth goal in all Member States – which means, not only the coal regions will be entitled to aid. Which was a criterium, that EU-11 Member States hoped for, as the situation of coal dependent regions is very complex and it requires additional attention, if the transition is to be accomplished within the given time span (see Figure 3). 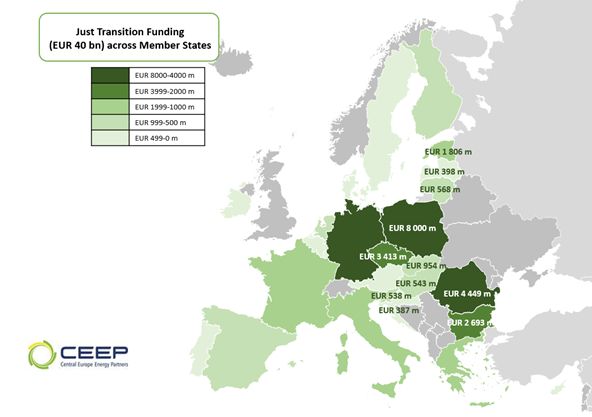 The second pillar of the JTF – a dedicated scheme for just transition regions under the InvestEU was also upgraded to a level of EUR 15.3 bn to mobilise private investment in projects across the Union. The InvestEU Just Transition Scheme will be reinforced as a consequence of the increase of the InvestEU guarantee.

A new Strategic Investment Facility will be built into InvestEU – to generate investments of up to EUR 150 bn in boosting the resilience of strategic sectors, notably those linked to the green and digital transition, and key value chains in the internal market, thanks to a contribution of EUR 15 bn from Next Generation EU. Additionally a ‘dedicated technical assistance will be provided to make projects investable through the InvestEU Advisory Hub, for which an additional envelope will be made available’.

The third pillar of the JTF is a public sector loan facility with the European Investment Bank Group. The support under the public loan facility will apply to projects, which do not sufficiently generate market streams of revenue and that otherwise would not get financed without a subsidy element.

It will consist of a grant component worth of EUR 1.5 bn from the EU budget and a loan component of up to EUR 10 bn from European Investment Bank's own sources. The facility is expected to mobilise now up to between EUR 25 and EUR 30 bn of public investment to the benefit of areas such as energy and transport infrastructure, district heating networks, public transport, energy efficiency measures, social infrastructure and other projects that can directly benefit the communities in the affected regions and reduce the socio-economic costs of the transition.

The grant component of the facility will be managed under direct management by the European Commission and the loan component will be provided by the European Investment Bank, in line with the Bank's rules, policies and procedures. To secure access to the facility, the grant component will be available to eligible projects in Member States, through national envelopes which will be earmarked until December 2024.