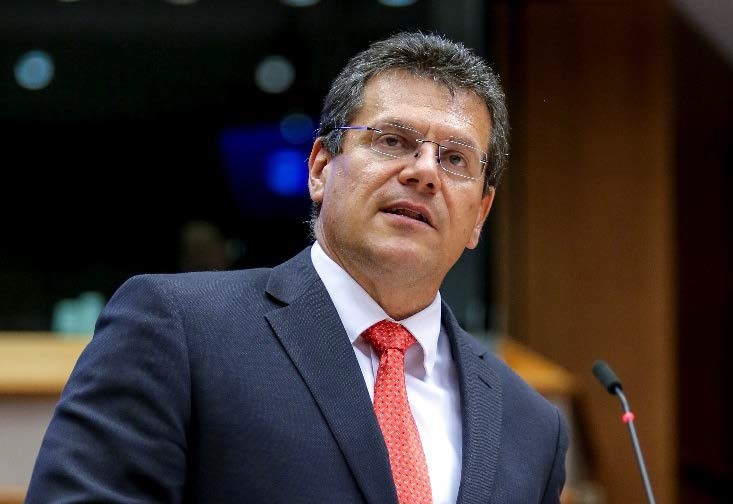 The European Commission has taken note of the plans of gas undertakings to build Nord Stream 2. If built, Nord Stream 2 would have to fully comply, as any other infrastructure project, with applicable EU law, including on energy and environment.

In May 2014, the European Commission set out in its Energy Security Strategy how the EU remains vulnerable to external energy shocks. It called on policy makers at national and EU level to diversify and reduce our dependency on particular fuels, energy suppliers and routes. The Energy Union builds on this strategy. Energy security, solidarity and trust constitute a key dimension of our framework strategy of 25 February 2015.

The key drivers of energy security remain the completion of the internal energy market and more efficient energy consumption. But events over the past years have also shown that diversification of energy sources, suppliers and routes are crucial for ensuring secure and resilient energy supplies to European citizens and companies.

More transparency and solidarity between the Member States are equally important. At the same time, the EU's energy security is closely linked with its neighbours. It is in this spirit, that on 16 February of this year, the European Commission presented its Security of Supply Package, which responded to many calls of this house. I believe that this package sends a strong signal that we are building a secure and resilient Energy Union, based on competition and cooperation for the benefit of EU citizens and companies.

Let me just recall that the package proposes a revised Security of Gas Supply Regulation, an LNG and storage strategy, changes to the scrutiny of Intergovernmental Agreements in the field of energy to make sure they are in line both with European law and security of supply objectives, and a Heating and Cooling strategy to moderate demand, which also contributes to enhancing energy security. Now this package is in the hands of the two co-legislators. I am confident that its final form will send a strong signal that the EU is determined to building a competitive and resilient Energy Union.

It is precisely in this context that we have to see Nord Stream 2, which is the main theme of today's meeting. I know that it is a subject of huge interest, sometimes concern of many in this house but also to Member States as was reflected in the recent letter of 9 Prime Ministers addressed to President Juncker. The concerns are of various nature, be it legal, geopolitical or economic.

We have taken note of the plans of gas undertakings to build Nord Stream 2. If built, Nord Stream 2 would have to fully comply, as any other infrastructure project, with applicable EU law, including on energy and environment. Let me underline again that EU law applies in principle also to off-shore infrastructure under the jurisdiction of Member States including their exclusive economic zones. What exactly within EU sectorial legislation applies has to be assessed in regard to their specific provisions.

The construction of such an important infrastructure project as Nord Stream 2 cannot happen in a legal void. This would also run counter to the interest of economic operators in having legal certainty. Neither can it be exclusively operated only according to Russian law. Against the background of colliding legal regimes, Nord Stream 2, if built, has to be operated under a legal framework which also takes duly account of the key principles of our energy market rules.

Germany has exemplary rules for the operation of pipelines connected to Norway. These rules not only fully respect the 3rd energy package, but also, regarding the environment, set out the rules for operation, maintenance and environmental monitoring of the three pipelines leading from Norway to Germany. These rules are set down in legally binding agreements between the countries; agreements the Commission has examined, so that we are in a position to praise the transparency and firmness of these rules. There are also other good examples.

As regards the operational safety aspects of the Nord Stream pipeline, these could have significant effects on human health. They are therefore to be assessed under the relevant national safety and environmental legislation (such as the Environmental Impact Assessment Directive). We will urge the Member States to clarify issues of environmental liability; in this context, the Commission is currently reviewing the situation at all sub-sea entry points into the EU, and will assess what further action may be needed.

And regarding the onshore section of Nord Stream 2, whatever its route on EU territory, the rules of the Third Energy Package must be duly respected and the Commission will ensure their correct application. But let me be very clear: the impact of the Nord Stream 2 project goes clearly beyond the legal discussions. Nord Stream 2 could alter the landscape of the EU's gas market while not giving access to a new source of supply or a new supplier, and further increasing excess capacity from Russia to the EU. This raises concerns, and I am pretty sure this will play a role in this debate.

Regarding the Energy Union objectives, as I said publicly before, the EU will only financially support infrastructure projects that are in line with the core principles of the Energy Union, including the EU Energy Security Strategy. Diversification of energy sources, suppliers and routes is crucial for ensuring secure and resilient supplies to European citizens and companies. Nord Stream 2, as presented so far, does not meet these conditions.

As regards security of supply, Nord Stream 2 could lead to decreasing gas transportation corridors from three to at least two – abandoning the route through Ukraine. Also the Yamal route via Poland could be endangered. Such a reduction of routes would not improve security of supply. Just today, the European Commission adopted a joint framework on countering hybrid threats. Critical infrastructure such as energy networks are highlighted in this policy paper as potential targets. Our diversification strategy has to be seen also in this light, if we want to build a resilient and secure Energy Union.

Let me say here a few words on Ukraine: Despite economic and political challenges, Ukraine continues to be a reliable gas partner and transit country. It is in the interest of all parties that Ukraine remains a significant gas transit corridor. The successful implementation of the gas winter package, with the constructive engagement of both Russia and Ukraine and facilitated by the European Commission, has helped to secure domestic consumption in Ukraine and contributed to smooth transit supply of Russian gas to the EU. The European Commission stands ready to continue the successfully proven format and to enlarge the trilateral talks to the negotiation of a new transit contract between Russia and Ukraine, as the current one comes to an end in 2019. To this end, the completion of energy sector reforms in Ukraine are of utmost importance and should be further implemented. There is no better reassurance for Ukraine to remain a transit country and to attract investors to its gas assets then by completing ownership unbundling of Naftogaz and setting up an independent energy regulator in line with the Third Energy Package. Ukraine has all our support to make these necessary game-changing steps.

Regarding the market impact of the Nord Stream 2 project, we are carefully analyzing what impact it can have on our ever more competitive gas markets. We have made a lot of progress in implementing the Third Energy Package across Europe and we have to make sure that no market operator is able to leverage its dominant position to the detriment of consumers. To this end, our LNG strategy aims at ensuring that all Member States have access to liquid LNG markets which are a competitive alternative to other suppliers.

To conclude, let me thank President Buzek and his colleagues for organizing this important conference. I feel very much encouraged by the excellent co-operation with and huge support by the European Parliament on the building of the Energy Union. We fully agree together that all energy projects must be fully aligned with the EU's core policy objectives, including energy security. In the end, we should not look in an isolated way on infrastructure projects. We have to find comprehensive and well balanced solutions, benefitting all Member States alike, as well as our neighbours and trading partners. In this context, we have to have a frank and objective discussion about how much gas do we really need in the future in the post-CoP21 context and against the background of the 2030 climate and energy framework. We have our own projections but to enlarge the debate, we have also approached IEA and ENTSO-G who are ready to contribute to such modeling. This would also help to better assess, what are the most cost-efficient routes really needed.

We are today at a crossroad. I am convinced that together we will succeed in achieving the goals of a resilient Energy Union with an ambitious climate policy, that is to give to our citizens secure, sustainable, competitive and affordable energy.