Opening of the Balticconnector gas pipeline between Estonia and Finland 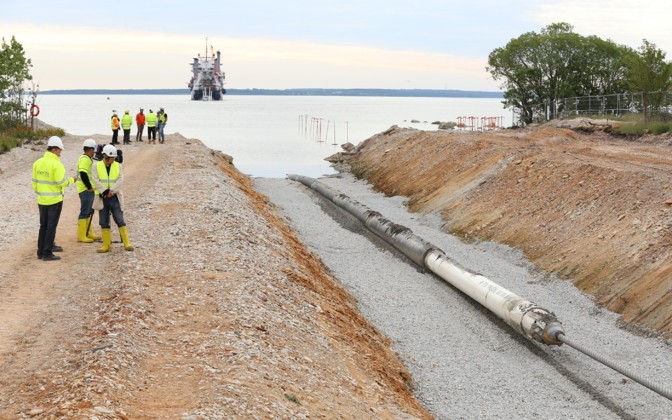 On Wednesday 11 December 2019 the Balticconnector gas pipeline between Estonia and Finland was officially launched. The construction work of the project was completed one month ahead of schedule. The commissioning of the pipeline allows the opening of the Finnish gas market as scheduled on 1 January 2020.
President of the Republic of Finland Sauli Niinistö, Estonia’s President Kersti Kaljulaid, Minister of Economic Affairs Mika Lintilä and Deputy Director-General Klaus-Dieter Borchardt, DG Energy, European Commission, were guests of honour at the event.
Balticconnector is a bidirectional natural gas pipeline between Ingå, Finland and Paldiski, Estonia. The pipeline provides Finland with an access to Baltic states gas market and in particular Latvia's natural gas storage in Inčukalns. The interconnector improves the local operational reliability of the gas system and enables decentralized gas, as well as the use of LNG and biogas. The Balticconector will improve the security of supply of natural gas in both Estonia and Finland; give the possibility to integrate with the EU single market when the Lithuanian-Polish gas interconnection GIPL will be completed in 2021.
The total transmission capacity of the Balticconnector is 7.2 million cubic meters per day. The submarine section of the pipeline between Estonia and Finland is 77 kilometres long. The pipeline reaches land in Finland in Inkoo where the 21-kilometre underground pipeline connects to Finland’s national transmission network.
Balticconnector Oy has been responsible for the project in Finland, and Elering for the works in Estonia. The offshore part of the project was managed jointly by the two companies. The project had a budget of EUR 250 million, of which 75 % was provided through investment aid from the Connecting Europe Facility (CEF).

Finland and Estonia celebrated the commissioning of the Balticconnector gas pipeline