The Southern Gas Corridor: a struggle between EU co-operation and Chinese dominance 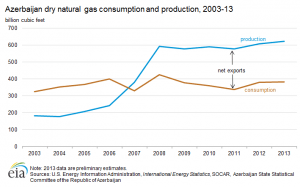 The recent stand-off in Ukraine and freezing of negotiations on the South Stream with Russia has increased the importance of the Southern Gas Corridor, especially for the EU. The negotiations between the EU, Azerbaijan, and Turkmenistan had already intensified in September, 2011. In July 2013, after high-level talks in Ashgabat, a framework agreement was signed between the governments of Turkmenistan and Turkey, on co-operation regarding deliveries of Turkmen gas to Turkey and Europe.

In April, 2014, the President of Turkmenistan, Gurbanguly Berdimuhamedov, met with the head of the State Oil Company of Azerbaijan (SOCAR), Rovnag Abdullayev, and agreed to build transit pipelines which will enable a diversification of gas supplies in both countries, and pave the way for transit to international markets.

However, Russia and Iran strictly oppose the construction of the TCP, stressing that the project cannot be implemented without first resolving the issue of the international legal status of the Caspian Sea. Moscow, in particular, perceives such a union of former Soviet Republics as undermining the hegemony of the Russian gas market. Russia, choosing to ignore the economic importance of the project to Turkmenistan and Azerbaijan, continues to complain about Western interference in the affairs of the region. In response, Baku and Ashgabat reject the objections from Russia and Iran, pointing out that the project affects the interests of only two littoral states, and hence, can be implemented on a bilateral basis. The EU, for its part, does not consider the absence of a decision on the status of the Caspian Sea as an obstacle to the implementation of the project.

In an interview, Azerbaijan’s Minister of Industry and Energy, Natig Aliyev, said that the Turkmen side was ready to provide, for the project, about 30 billion cubic metres (bcm) of gas annually, and Azerbaijan was ready to create all the necessary conditions and infrastructure for its further transportation to European countries.

However, Ashgabat is in no hurry to start laying the pipe, preferring to receive payment for the delivered gas on the state’s borders, and leaving all other questions to the buyers. However, for those doubting the environmental risks of the project, the government of Turkmenistan has repeatedly expressed its readiness to conduct an environmental impact assessment, with the participation of international experts, thereby confirming its openness for further dialogue.

In his interview for the London-based news agency, ‘The Report Company’, in late 2013, Aliyev stated that one of the main areas of co-operation between Azerbaijan and the EU was the dialogue on energy. The Memorandum of Understanding on Co-operation in the Field of Energy between the European Union and Azerbaijan, signed on the 7th of November, 2006, had earlier established such a dialogue. The major objectives of the MoU included the diversification and security of the EU’s energy supply, as well as the development and modernisation of Azerbaijan’s energy infrastructure.

to the Minister, new opportunities were created for a more intensive co-operation in the energy sector after the adoption of the EU Eastern Partnership Programme by Azerbaijan in May, 2009. A reflection of the positive development of such relations was the high-level visit of the President of the European Commission, at that time, José Manuel Barroso, to Azerbaijan in January, 2011. The Joint Declaration on the Southern Gas Corridor was signed during that visit, re-confirming that energy was a priority area for both parties.

Regarding Azerbaijan’s energy diplomacy towards the EU, another noteworthy statement was made by the Minister of Foreign Affairs of Azerbaijan, Elmar Mammadyarov, at the 5th Foreign Ministers’ meeting of EU Member States and Eastern Partnership countries on the 22nd of July, 2014 in Brussels. Mammadyarov emphasised that Azerbaijan was a reliable partner for the EU in the energy sector, delivering its natural gas on a large scale and at a competitive price. The Minister also stressed his country's efforts in creating a potential gas transportation infrastructure as part of the process of connecting the Caspian region with Europe.

Azerbaijan’s plan is to increase the volume of gas production up to 28.8 bcm by the end of 2014. According to the Trend News Agency, the first vice-president of SOCAR (State Oil Company of Azerbaijan) Khoshbakht Yusifzade said on October 27, 2014 in Baku during the XIII Conference on investments and energy regulations of the Energy Regulators Regional Association (ERRA), that Azerbaijan's proven gas reserves amount to 2.55 trillion cubic meters, and the proven oil reserves of the country stand at the level of 2 billion metric tons. In total, oil and gas reserves of the country are estimated at 10 billion metric tons in oil equivalent. In particular, SOCAR launched a new well within the Guneshli field in the Azerbaijani sector of the Caspian Sea, with a daily production rate of 85 tonnes of oil and 16,000 m3of gas. The company plans to drill another 20 new wells in this field. It is clear that Azerbaijan has much to offer to its European partners and potential customers in terms of gas supply.

The Turkmen gas field, Galkynysh, recognised as the world's second largest, could easily become a resource base for this ambitious project. President Berdimuhamedov promised to begin its development this year. So 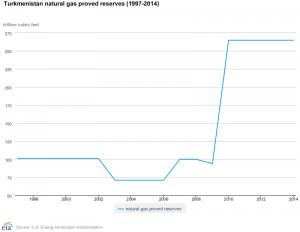 uth Korean and Chinese companies have already started building three natural gas-processing plants there. The capacity of each will be around 10 bcm of gas per year. Furthermore, in accordance with the Programme of the Oil and Gas Industry, Turkmenistan plans to increase its annual natural gas production to 250 bcm up to 2030, most of which is intended for export.

"Turkmenistan will continue to actively participate in the development of mutually-balanced solutions to all issues related to the Caspian Sea," declared the President, at the weekly cabinet meeting in Ashgabat on the 14th of April, 2014.

Moreover, at a special meeting regarding the country’s oil and gas sector earlier this year, President Berdimuhamedov called the TCP project, “one of the most important tasks for the country’s energy diversification.”

A week earlier, on the 2nd of April, 2014, the topic was also discussed in Baku, during the visit of the Minister of Foreign Affairs of Turkmenistan, Rashid Meredov, with his Azerbaijani counterpart, Elmar Mammadyarov. The two Ministers expressed their interest in the use of alternative routes for supplying the energy resources of the Caspian region to Europe.

The 1st Trilateral Meeting of the Ministers of Foreign Affairs of Turkey, Azerbaijan, and Turkmenistan was held in Baku, on the 26th of May, 2014, where Azerbaijan’s ‘big brother’ Turkey, seemed to assume the role of the key negotiator, motivator, and catalyst for the development of the Southern Gas Corridor. At the end of the meeting, the Foreign Ministers announced their decision to hold the 2nd Trilateral Meeting in the second half of 2014, in Ashgabat.

“These important steps are a positive sign, and can provide an impetus for the rapid implementation of all the projects in the Southern Gas Corridor chain. In all endeavours, the first step is always the most difficult and the most important one, and the natural gas market is no exception to this,” the Ministers declared.

Russia is no longer the biggest competitor to the EU in Turkmenistan, as it has been replaced by China. Turkmenistan is rich in energy resources, whilst China has a huge market, and the two countries have great economic complementarity and are determined to co-operate. The rich gas resources of Turkmenistan contribute to China's goal of diversifying energy imports and ensuring energy security. 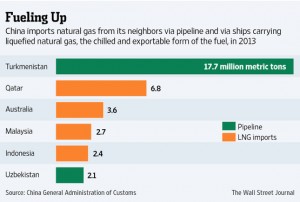 e an important partner for China in gas co-operation. This was stated in an interview with the news agency, ‘Xinhua’ by the Deputy Director-General of China’s petroleum joint-stock company, PetroChina, Lu Gunsyun. According to the company official, in accordance with the agreement signed by Chinese President Xi Jinping, during his visit to Turkmenistan in 2013, the annual volume of natural gas supplied by Turkmenistan to China, will increase from 40 bcm in 2014 to 65 bcm in 2020 (after gas from the Galkynysh field starts to flow), the fourth branch (D) of the pipeline through Uzbekistan, Tajikistan and Kyrgyzstan being built for that purpose. According to the Deputy Director-General, with the deepening of the strategic partnership between the two countries, their gas co-operation will be further strengthened and will become an inexhaustible impetus for improving inter-state relations.

Turkmenistan is now, by far, China’s largest foreign supplier of natural gas: 24.25 bcm (about 17.7 million metric tonnes) in 2013, or 50.2 percent of its total gas imports, according to the article published by The Wall Street Journal. This represents about 2.5 times more than Qatari supplies to China (see the chart below). By the end of 2014, gas deliveries from Ashgabat to Beijing will have totalled around 30 bcm, or about one-sixth of China's annual usage.

Signs of hope for the EU

Nevertheless, there is reason to believe that Ashgabat, in the light of the agreements in mid-May, 2014, between Moscow and Beijing on Russian gas supplies to China to the amount of about 40 bcm per year, via the Power of Siberia pipeline, may well re-consider its position and take a political decision in favour of the Trans-Caspian gas pipeline. Russia's strong position, in relation to the Chinese energy market, is likely to create competition for Turkmen gas that could result in significant financial losses for Turkmenistan. Beijing’s policy of diversifying energy sources, could also lead it to seek a revision of gas prices with its current gas suppliers - Turkmenistan, Uzbekistan and Kazakhstan.

In addition, China plans to increase its own production of gas, thus climbing up to third place in the world, behind Russia and the United States by 2025. So, although the supply of Turkmen gas is expected to increase (in the short-term), Ashgabat will be limited to the role of a supplier, who only patches up the holes in the Chinese energy grid. Therefore, Turkmenistan’s long-term interest in supplying its gas to Europe will probably be perceived as necessary, and the TCP will finally gain in true relevance for Ashgabat.

At a time when control over the energy transit corridors from the Caspian basin to Europe becomes extremely important, the probability that Turkmenistan, and especially Azerbaijan, which is already in the game, will focus on strengthening energy co-operation with the EU, is relatively high. This will play a crucial role in strengthening their energy independence and diversification.

It is not only these two countries who should be involved in the process. The significant support and solidarity of the EU is crucial in order to resolve the outstanding obstacles to the project. Though there is a substantive discussion on the opportunities for co-operation in the energy sector between Turkmenistan and the EU, the relationship remains relatively weak, and an organised campaign to build stronger relations should be launched.

As a result of the high-level, trilateral Turkish-Azerbaijani-Turkmen consultations, in the near future, one can expect an intensification of the dialogue between the EU and Turkmenistan on the implementation of the Trans-Caspian gas pipeline. Experts suggest that once all the political and economic differences between Turkmenistan and Azerbaijan are solved, the project of building a gas pipeline under the Caspian Sea could be carried out.

On the other hand, taking into account its growing demand for energy, as well as the country’s readiness to invest in the necessary infrastructure and to pay for the gas, China is now a major competitor to the EU in Turkmenistan. 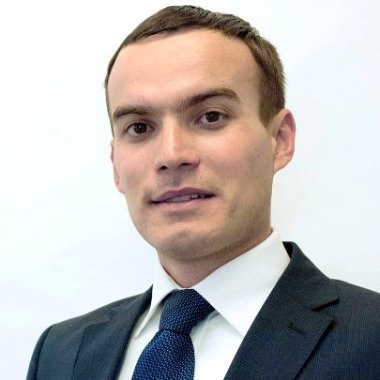 Eldar Latypov is Energy Analytics intern at Central Europe Energy Partners, Brussels. He is originally from Turkmenistan. He is also the M.S candidate in European Political Economics at University of Trier, Germany.