Summary after the ‘Energy Summit 29+1’ in Bucharest 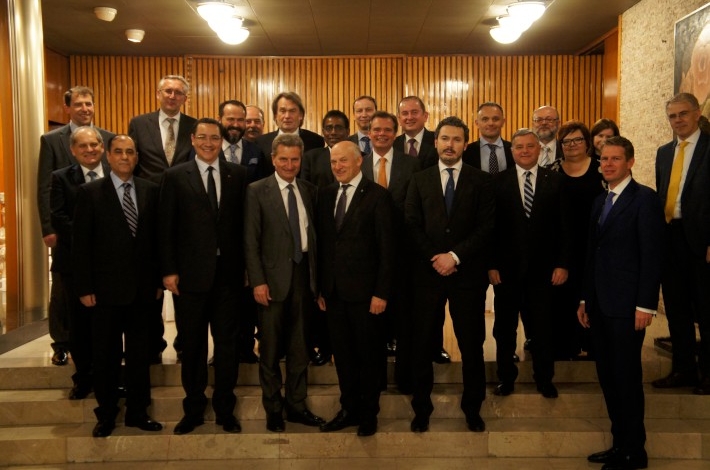 The main theme of the Bucharest Summit was energy prices and costs in Europe. This 3rd edition of the ‘29+1 Energy Summit’ was held, as usual, under the Chatham House Rule, on the 24th and 25th of April, 2014, in Bucharest (Romania), under the patronage of the Prime Minister of Romania, Mr. Victor Ponta, and the Minister Delegate for Energy of Romania, Mr. Răzvan Nicolescu,. The formula for the ’29+1’ had previously been tested successfully in Budapest and Vilnius.

The opening remarks were delivered by Prof. Dr. Friedbert Pflüger, Director of the European Centre for Energy and Resource Security, King’s College, London, and, afterwards, Mr. Paweł Olechnowicz, Chairman of the Board of Directors of Central Europe Energy Partners, AISBL, introduced the forum, which was followed by a welcoming speech from the Minister Delegate for Energy of Romania. A panel discussion and a lively question-and-answer session with Mr. Günther Oettinger, the EU’s Commissioner for Energy, followed.

“To satisfy the energy policy guidelines for 2020, Central Europe needs to invest EUR 400–460 billion in efficient electricity generation and transmission. Various estimates foresee that electricity prices for industrial customers in the EU-11 could rise between 40 and 60%, and this undoubtedly will impact on individual consumers as well”, warned Paweł Olechnowicz, Chairman of the Board of Directors of CEEP.

The participants at the Summit entered into a comprehensive exchange of findings and views with the EU’s Commissioner for Energy, and considered the main issues raised, which were afterwards officially incorporated within the ‘Bucharest Memorandum’. This is an excellent document reflecting upon the outcomes of the Energy Summit ‘29+1’, that will be helpful for both the Commission and the energy agenda of the forthcoming Italian EU Presidency, supported by the Central European energy companies and participants at the Summit.

At the end of the Energy Summit, Mr. Olechnowicz gave to the Commissioner, Mr. Oettinger, the Prime Minister, Mr. Ponta, and the Minister Delegate, Mr. Nicolescu, copies of the ‘Bucharest Memorandum’.

Since 2012, CEEP has organised gatherings of the 29 most important Central European energy sector companies, with the EU’s Commissioner for Energy, Mr. G. Oettinger, via the structure of an An­nual Energy Summit. The meetings take place in Central European capi­tals, and are a unique chance for the EU’s top representatives and energy sector businessmen from 11 countries in the region, to ask open questions and express their interests directly to the leading figure behind the EU’s energy policy, as well as to share their insights and ideas.