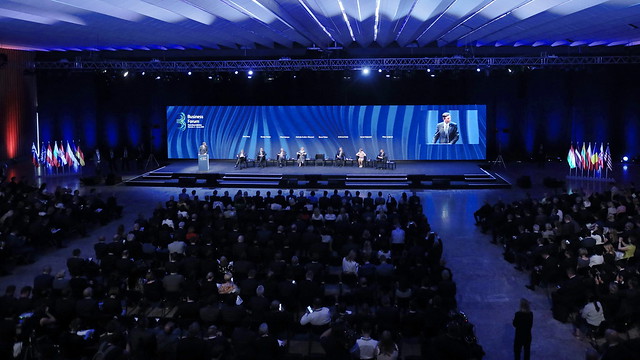 The Presidents and the high-level representatives of the 12 participating States of the Three Seas Initiative (3SI) met in Ljubljana on 5-6 June 2019, on the occasion of the fourth Summit of the 3SI, hosted by Slovenia. With the same occasion, the second Three Seas Initiative Business Forum took place and focused on four key areas: energy, infrastructure, digitization and innovation.

The Business Forum was attended by 500 participants from the private sector and governments of the Three Seas Initiative states, but also high representatives from EU institutions, US and Germany and business representatives from the wider region. Among the high-level participants to this event, one could count: European Commission President Jean-Claude Juncker, US Secretary of Energy Rick Perry, US Acting Assistant Secretary of European and Eurasian Affairs Philip Reeker, German President Frank-Walter Steinmeier.

The executive director of CEEP, Maciej Jakubik, presented his views during the side-event panel discussion on “Powering the 3SI: Opportunities and Next Steps for Building a Regional LNG Market”.  “With the LNG deployment to the region it is not only competitive and fair pricing that will come, what we naturally see as a clear LNG advantage. The LNG brings also a security premium of natural gas from an external, non-Russian supplier.”

The idea of the Three Seas Initiative is to strengthen regional dialogue and connect EU member states on the north-south axis through the promotion of investments in business, transport connections, energy infrastructure and digital communications.

The precedent summit, in Bucharest, achieved significant progress in the energy field by the adoption of a list of priority energy projects, which construction will significantly increase interconnectivity in Central Europe. All of these eight multilateral energy projects remain critically important for the region in the assuring energy independence from external players and development of the internal energy market. The European Commission equally supports all of them.

A progress report was presented this year in Ljubljana, showing that two of the projects from the list above have already been completed. More, the analysis shows that at least one half of the Priority Interconnection Projects are to receive EU financial support, primarily in the transport and energy sectors, while in digitalisation, other or more innovative sources of financing are to be sought.

The Three Seas Initiative is a flexible political platform launched by the 12 EU Member States located between the Adriatic, the Baltic and the Black seas: Austria, Bulgaria, Croatia, the Czech Republic, Estonia, Hungary, Latvia, Lithuania, Poland, Romania, Slovakia and Slovenia. The Initiative’s aim is to support regional dialogue and closer links between countries on the North-South axis. The key driver of development in the region is investments into industry, transport connectivity, energy infrastructure and digital communications. Up until today, the Three Seas Initiative launched on the margins of the UN General Assembly in September 2015, has held three summits under the high patronage of Heads of State – in Dubrovnik in August 2016, In Warsaw in July 2017, and in Bucharest in September 2018.

Next year’s edition will take place in Tallinn, Estonia.