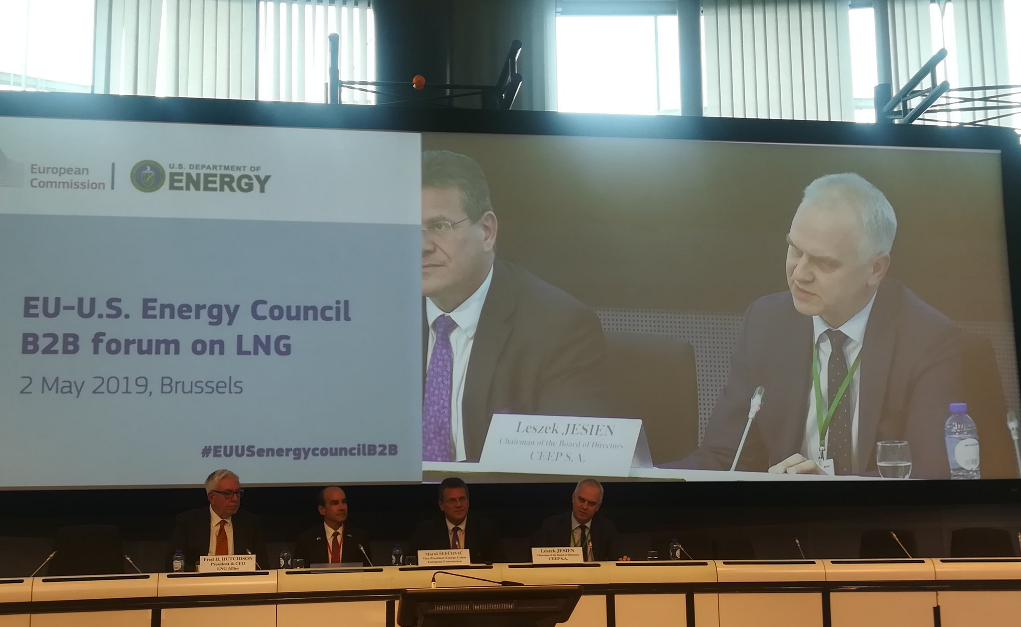 “LNG as a reliable source of supply, with flexible terms of trade and delivery options, as well as competitive pricing, will improve the security of supply for Central Europe and it will also strengthen the transatlantic relations which will be beneficial for our continents”, stated  the chairman of the board of directors of CEEP, prof. Leszek Jesień, at the 1st EU-U.S. Energy Council B2B Energy Forum, that took place on the 2nd of May in Brussels.

The event gathered around 400 stakeholders both from the U.S. and the EU, enjoying the participation of the U.S. Secretary of Energy, Rick Perry and Commissioner for Energy and Climate Action, Miguel Arias Cañete, the Vice-President for Energy Union, Maroš Šefčovič, and European Parliament’s ITRE Committee chair, Jerzy Buzek. The event focused on LNG and was organized by the U.S.-EU Energy Council in collaboration with Central Europe Energy Partners, Polskie LNG and LNG Allies.

A key objective of the initiative was to encourage business contacts and promote the further uptake of competitively priced U.S. LNG to the EU. Both U.S. and European officials expressed their interest in increasing volumes of LNG imports to the EU. They underlined that a key enabler of this process is the development of infrastructure on both sides of the Atlantic. Moreover, business leaders examined different aspects of trade in LNG.

During the event, Central European states were represented by speakers from Poland, Lithuania, Croatia, Hungary and Romania. Each of these countries underlined that LNG in Central and South Eastern Europe has a role in gas supply diversification and increases the level of security of supply. Piotr Naimski, Plenipotentiary for Strategic Energy Infrastructure of Poland, elaborated on the future diversification plans of Poland which entail the expansions of the LNG terminal in Świnoujście and the installation of a floating unit in Gdansk by 2024, with capacity of 4 bcm.

The Chairman of the board of directors of CEEP reminded that the infrastructure for LNG imports in Central and Eastern Europe gets expanded. “We have now two operational LNG terminals – in Świnoujście, Poland, and Klaipeda, Lithuania; while the third one in Krk, Croatia, is in construction. More than that, there are other projects being currently developed in Poland and Estonia. This demonstrates the interest of the markets of these countries in LNG use. Here, I would like to point out the need of a continuous EU support for new projects, also via various funding sources, be it Connecting Europe Facility or Structural Funds. Also, the development of LNG infrastructure in the region fits nicely into the Three Seas Initiative, to reconnect infrastructurally the whole region, particularly along the North-South axis”.

The participants to the forum positively assessed its role in further developing the transatlantic trade of LNG and agreed that this kind of format should be continued in the future.

In their Joint Statement of 25 July 2018 in Washington D.C., President Juncker and President Trump agreed to strengthen EU-U.S. strategic cooperation with respect to energy. They came in particular to an understanding on the benefits of expanded exports of U.S. liquefied natural gas (LNG) to the EU gas market.

Since the first cargo in April 2016 U.S. LNG exports to the EU have been increasing substantially and have seen a steep rise after President Trump and President Juncker's meeting in July 2018 increasing by 272%. As a result, March 2019 recorded the highest volume ever of EU-U.S. trade in LNG with more than 1.4 billion cubic metres.