US Shale Oil: the test of the Business Model is underway 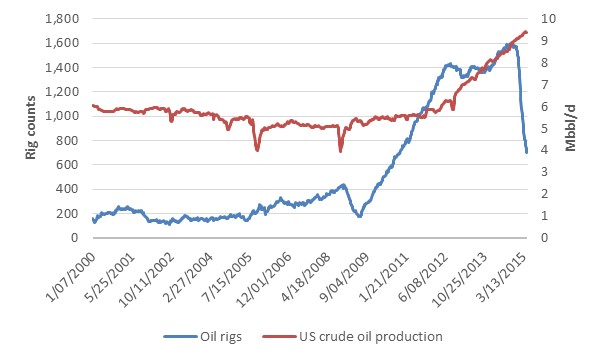 Since 2010, the United States has been undergoing a second shale revolution with the very rapid development of shale oil or Light Tight Oil (LTO), following the revolution in shale gas. The rapid increase in LTO production from less than 1 Mbbl/d in 2010, to nearly 5 Mbbl/d in 2014, was made possible by high investments in US shale ($129 billion in 2014), the high level of crude oil prices, and continuous technological advances.

Thanks to this development, the USA has become the world’s largest producer of crude oil and other liquids, ahead of Saudi Arabia and Russia. The production of LTO, accounts for 55% of US crude oil output now, and has enabled the country to reduce its oil imports and expand its exports of oil products. This has important ramifications for the world oil market, traded oil flows, and the oil price. The decline in oil prices, however, makes continued investment in the sector uncertain, and therefore, the growth in LTO production, too.

The LTO business model differs from that of conventional oil

As operating costs to produce LTO are limited, production at existing wells is not really called into question. However, LTO output is characterised by very rapid declines in initial production per well (between 60% and 90% in the first year). Therefore, sustained and continuous investment in new wells is necessary to maintain and/or increase output. Such rapid output decline also means that projects are very strongly dependent on the price of oil in their first year of operation. This contrasts with conventional oil production whose economics spans much longer time periods. The fall in oil prices raises significant uncertainties concerning the ability of US producers to pursue further investments, that are needed to drill new wells, to offset the rapid decline of existing wells.

A wide range of breakeven prices: location is key

[Tweet "Breakeven prices provide information about the minimum oil prices needed for drilling projects to be profitable"]Breakeven prices provide information about the minimum oil prices needed for drilling projects to be profitable. Yet their analysis needs to be qualified. The cost of producing LTO is a determining factor, but it is practically specific to each individual well, given the greatly diverging geological properties of each play, and even within what is a same play between “sweet spots” and wells at the periphery. This explains the heterogeneity of breakeven prices, so that the figures of $60 to $80/bbl, which are often put forward, need to be strongly nuanced according to the location of production, the depth of the well, its initial production, the complexity of its completion, etc. Rystad Energy estimates an average WTI breakeven oil price of $58/bbl for the main shale plays in the US, and even below $55/bbl in the core areas of the Eagle Ford, Niobrara, PRB, Bakken, and some plays in the Permian basin. The North Dakota Department of Mineral Resources says that the breakeven price on a Bakken well can vary from $30 to $73.Oil prices are expected to remain high enough to support continued development drilling activity in the sweet spots of the three main formations (Eagle Ford, Bakken and the Permian basin), which account for the majority of US LTO output. It is, therefore, expected that drilling activity will move to these more productive wells and sustain LTO production. This has been confirmed so far by the growth of LTO production, despite the fall in oil prices. Although there has been a drop in investment (US operators have cut their 2015 capital expenditures by 20% to 60%), and a sharp drop in shale oil drilling (oil rig counts declined by 56% at end April, 2015, from their peak in October, 2014), LTO production increased by 10% to 5.6 Mbbl/d between October, 2014, and April, 2015. 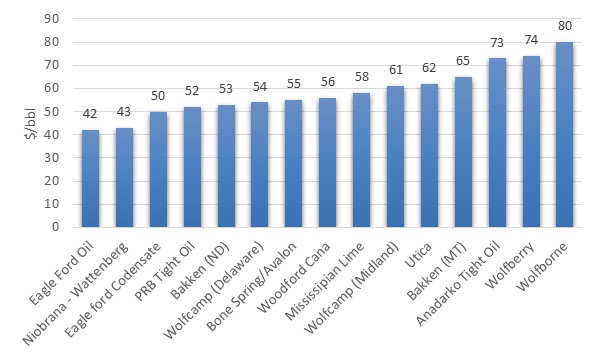 Breakeven prices alone, however, do not explain the level of future investment. There are other important criteria, such as available cash flow, the scale of debt, and hedging strategies for production. These are specific to each operator, and will determine their capacity to reinvest in new wells. Most independent producers have largely drawn on debt to finance their drilling programmes. For this strategy to be continued, they will have to be able to carry on accessing capital markets at advantageous rates, as has been the case since 2010. This is a particularly tricky issue for some independent producers, who use a large share of earnings to service debts, a situation which is clearly aggravated by falling revenues. If low prices continue to prevail, some independent producers will not be able to finance their drilling programmes, even if such drilling is profitable. A consolidation of the sector, therefore, seems likely. At the same time, many operators have hedged a significant part of their 2015 production, thus protecting themselves against falling prices. The impact of falling oil prices is subsequently varied, not only across plays, but also across operators.

Technological advances are at the heart of the shale industry. They have allowed efficiency and productivity gains of over 10% per year since 2009. The real breakthrough came in the last two years with the advent of the extended reach of horizontal laterals (up to 3 km), combined with hydraulic fracturing in multi stages. In 2014, companies successfully tested the reduction of the spacing between wells. Further cost reductions are expected in 2015, driven by a reduction in the costs of services. These productivity gains and cost reductions improve the resilience of production to lower oil prices.

Growth: lower, but still projected for 2015

The capacity of US shale oil producers to resist low oil prices and to adapt to oil cycles is a test, not just for the USA, but also for all countries seeking to develop their shale resources.

This article is drawn from the report “The US Shale Oil Revolution: The Test of the Business Model is Underway“, published by the Energy Centre of IFRI.